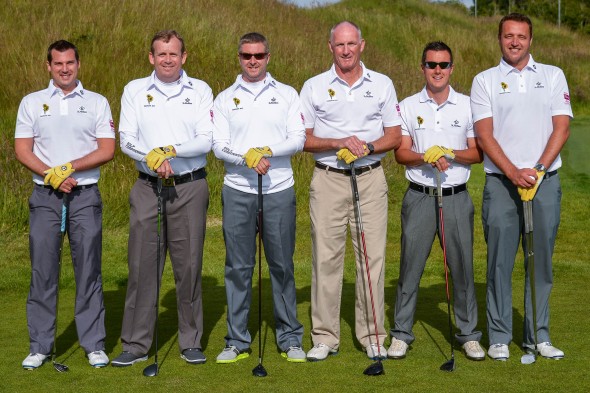 How many holes in one can we score, in 24 hours?

That’s the question which six golfers from St Mellion International Resort in Cornwall are setting out to answer in the second annual ‘Davida’s Day’ golf event, as they aim both to raise money for the CLIC Sargent charity, and to set a new record.

Spectators will be welcome at the marathon mid-summer challenge, to be staged at St Mellion from 1pm on Thursday 23rd June.

It takes place a year after the same six golfers played the resort’s world-famous Nicklaus Signature Course continuously for 24 hours, raising £12,000 in the process.

First to tee off this year will be the event’s organiser, St Mellion PGA Pro Darren Gass. He was the husband of 35-year old Davida Gass, who passed away in November 2014 after battling pancreas and liver cancer. The event is named in her honour. The couple had a son, Foster, who is now 8 years old.

“Everyone at St Mellion was fantastically supportive last year, and this year’s event should be a real talking-point. After all, how many times do you get to witness a hole in one?” said Darren Gass. “I hope that this new idea inspires people to get involved once again, and of course we’re all trying to raise as much money as possible for CLIC Sargent, which was so close to my wife’s heart”.

A 130-yard golf hole, where the marathon will take place, will be laid out like an archery target. As the light fades the hole will be floodlit, allowing the six golfers to play right through the night.

Other golfers at St Mellion, including members, their guests and other supporters, are invited to challenge the resort’s golf professionals in a Shoot Out to run continuously throughout the event.

There will be a charity BBQ and Bar running alongside the hole, with a charity auction staged early on the Thursday evening.

“Last year the support we received was incredible” said David Moon, Golf Manager at St Mellion and one of five PGA professionals playing in the marathon. “It’s not often you find yourself eating tea and bacon rolls at three in the morning on the golf course. The climax to last year’s event was extremely moving, with young Foster holing the final putt as his Dad tended the pin.

“This year we’re expecting to get quite dizzy, playing the same hole over and over again, but the six of us are determined to score plenty of holes in one along the way! We hope that people will once again enter into the spirit of things, and will help us raise money for a cause which is very personal to all of us.”

As well as Darren Gass and David Moon, three other PGA professional golfers from St Mellion – Ben Waters, Jason Avery and Ross Whitelock – will also play in the marathon.

Darren, Allan and their friends are raising money for CLIC Sargent, the charity for children with cancer. Five years before Davida was herself diagnosed with incurable cancer in 2013, the Gass family was rocked when their 3-month old baby was diagnosed with a life-threatening tumour. Over the years which followed, both the Bristol Royal Children’s Hospital and CLIC Sargent provided superb care and support for the parents, as Foster went through prolonged and gruelling treatment.

Although he was initially given just a 20% chance to live, Foster battled through and is now a healthy and energetic young boy. The Gass family and friends subsequently threw themselves into supporting CLIC Sargent, but on 21st November 2014 Davida Gass lost her own fight with the disease.

A donations page has been set up at https://www.justgiving.com/fundraising/Davida-Gass.