And so it all begins.  The golfing season, Amen Corner, vibrant azaleas, and one more iconic Green Jacket slipped on to the shoulders of a new Champion (or perhaps an old one?).  We won’t be sorry to say goodbye to the pre-season – all that dismally wet and windy weather (at least for those of us in the UK) – so the 78th Masters Tournament at Augusta National can’t come soon enough. It’s food for the golfing soul, and never fails to whet our appetite for the game. 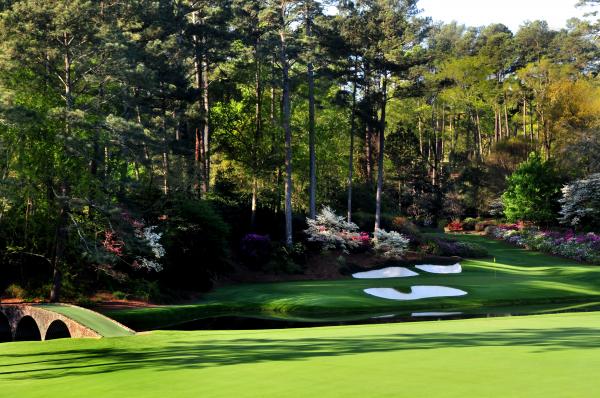 But as the title suggests, for all the magic and excitement that surrounds the first Major of the year, there are a few foibles in this corner of Georgia, that serve to mesmerise and bemuse in equal measure. One man’s meat is another man’s poison, as it were. For instance, does the exclusivity of Augusta National, with its stuffy facade and elitist membership, make it all the more appealing or detract from the event? Are the flamboyantly coloured azaleas, the glorious rhododendrons and the perfect fairways charming or more like a Walt Disney dream? And does granting lifelong exemptions into one of the four biggest tournaments of the year impact the quality of the field or make it all the more prestigious?

I could go on. What’s better, The Open or The Masters?  It’s a debate that divides opinion.  Whatever your personal taste, for many The Masters is the premier golf event of the year and Augusta National is guaranteed to capture the attention and the imagination, making the headlines every year even before play has begun.

Having witnessed quite a few in my time (on TV you’ll understand!), it’s easy to feel the anticipation as you know what to expect – the holes, the personal stories, the Sunday back nine. I love the perfectness, the fact there won’t be a single pine cone out of place and the greens will run like billiard tables (and I spare a thought for the club secretaries and greenkeepers whose members believe that course presentation like this is attainable in the real world).

I don’t watch it, but I enjoy the tradition of the Par 3 Tournament on the eve of the main event. And I pity the poor soul that posts an early score and then has to watch player after player deliberately throw away a score to avoid the infamous Par 3 curse!  No winner has ever gone on to winner the event proper.

And what’s on the menu for the Champions Dinner?  The first Aussie to host, I’ll be disappointed if Adam Scott opts for anything more than beer with a side order of BBQ – and then listens to his guests’ comments on the grub. It’s a dinner that’s set to show off the growing cultural mix on the professional scene in years to come.  Poor Fuzzy Zoeller, how will he cope?

As for the tournament action itself, well no doubt you can put some money on a few dead certs over the course of four days. A hole in one on the 16th is always a favourite, especially on Sunday. Someone ricocheting off another flag a la Tiger in 2013, perhaps?  One thing you can guarantee is a cringe-worthy presentation “live from the Butler Cabin” on Sunday night – the schmoozing of Jim Nantz and awkwardness of Billy Payne.  I always feel for the new champion having to endure those staged first few moments, but I am sure I could grin and bear it too if I was about to have a Green Jacket presented to me.  Plus, they can still deny your membership, so it’s worth the effort.

I prefer to think of those Augusta roars, the recognisable holes and the unparalleled electricity. I look forward to missing the Eisenhower Tree this year and see what’s now in its place (if anything), and I will hope for an English Champion.  Perfect evening viewing, and always the antidote to those long-gone winter blues.  Roll on summer.