Germany had its Bernhard Langer, and more recently, Martin Kaymer.  Spain had, of course, the inimitable Seve, then Jose Maria Olazabal and Sergio Garcia.  Sweden has been a conveyor-belt of Ryder Cup players, Denmark has Thomas Bjorn and even Italy, with its comparatively modest golfing pedigree, has had Costantino Rocca, and now the Molinari brothers and Matteo Mannassero.  France has perhaps underachieved, but has still delivered a list of established European Tour Pros and names that we all know, like Jean Van de Veld.  Northern Ireland punches well above its weight, boasting three Major champions in little over a year, Wales brought us Ian Woosnam and Scotland a catalogue of famous old names plus some more recent Major winners in Sandy Lyle and Paul Lawrie. While England hasn’t produced a Major winner since Nick Faldo, there has been a constant stream of world class professionals, including recent World Number Ones Lee Westwood and Luke Donald.  But for all the famous golfers making a name for both themselves and their respective European countries, Portugal remains conspicuous in its absence.

Despite an abundance of top notch golfing facilities across the Algarve and beyond, many of which have been established for decades, Portugal is still awaiting their first golfing superstar.  It’s a shame, and the region would benefit from a breakthrough performance. Surely it’s time the trend was bucked. 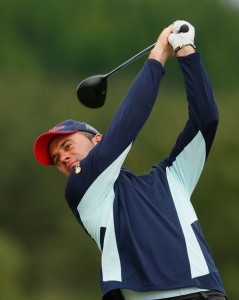 It’s only recently that Ricardo Santos was appointed brand ambassador for Oceanico, but in the past few years it’s been the faces of Lee Westwood and Darren Clarke acting as the inspiration to a Portuguese nation of golfers. Then again, perhaps that’s half the point. Perhaps they aren’t intended to provide inspiration to the Portuguese, but inspiration to British tourists. That’s all well and good, but for the sake of home grown talent in Portugal, they need their own superstar. Longer term, a home grown player will serve as much greater influence on the growth of their domestic game, and in turn the success of the resorts, than borrowing a pro from another part of the world.  By all accounts, Seve almost single-handedly brought golf to the domestic Spanish market.  What Portugal would do for the same.

Professional golfers undeniably bring exposure to their native countries on the golfing map. Consider the number of Americans now likely to add the rugged links courses of Northern Ireland to their itineraries when visiting Ireland, just to experience the course where Darren, Rory and GMac grew up. Without doubt, a Major champion from Portugal would widen the country’s golfing reach, especially if the Major they won was a US Masters or US Open.

Of course, there are plenty of reasons that will have contributed to Portugal’s failure to-date, but surely over the years one player should’ve made it through to the big time? Granted, there have been one or two flirting with the fringes of the European Tour for a few years, but are any of them considered to be a ‘household name’?

For a start, the trouble for Portugal is that there hasn’t been someone from a previous era of such stature as Gary Player or Seve Ballesteros, to raise the profile of golf to the youngsters. In most successful golfing countries, one player in a generation inspired a future pool of talent. Years later, one of these inspired another group of youngsters. The trouble is, you need that initial breakthrough to kick start the process, and to date Portugal hasn’t had one. Sadly for golf, one suspects that the inspiration was concentrated in other sports, particularly football, from the likes of Eusebio, Figo and Cristiano Ronaldo. Football is undoubtedly ‘cooler’ than golf, and you’d suspect that the younger generation dream of emulating Ronaldo’s footsteps, rather than Jose-Filipe Lima. No disrespect intended.

I also doubt that the infrastructure and support levels at the top of the amateur circuit in Portugal rival that of other countries. For example, can it compare to the EGU who do a sterling job in fostering the best young talent to the professional ranks? Does the Portuguese golf federation do the job to the same effect? Or produce similar results? Clearly not, though funding and volumes of players are surely valid excuses.

As touched on, financial reasons are perhaps the greatest hindrance of all. Portugal’s economic situation is well documented, so it’s probably fair to assume that in an industry priced towards tourists, the average Portuguese family might well be unable to afford, let alone justify, a sizeable outlay at the local golf club.

I’m sure there are many other contributing factors, too, and doubtless there are people far better placed to explain them.  But the roots of the problem are certainly there to see.

Of course, one day a Portuguese player will break through and buck the trend and the lift it will give to the region, and in particular the domestic game, when it does will be immense. While the 2018 Ryder Cup was recently awarded to France, there was a very strong case for Portugal to host the event. It’s fair to assume that they will bid again (and get it) another year, but you have to wonder whether the weight of a star player behind a bid might make the difference.  That the first Ryder Cup in Continental Europe went to Valderrama in Spain was solely down to Seve’s captivating heroics in the event during the 1980s and early 1990s. Perhaps when it comes to bidding for the 2022 Ryder Cup, Portugal may have a superstar to do just that. A famous ambassador carries significant weight to a Ryder Cup bid, and a Ryder Cup elevates a country beyond all recognition in golfing terms.

Consider the boost French golf will be given for the coming years as it prepares for the arrival of the Ryder Cup at Le Golf National. Golf will go wild as 2018 gets closer, and France stands to benefit. Nobody is saying that hosting a Ryder Cup is the only route to longevity of success, but you can see how Portugal would benefit from doing so in the future. A home grown Major Champion would undoubtedly influence a bid, and greatly raise the profile of the country as a golfing destination on the world stage.

Sadly, as things stand, that doesn’t look particularly likely, but regardless I hope Portugal produces at least one stand-out player sooner than 2022. The courses, facilities, and weather are too good a breeding ground for the barrenness to continue.