The Top 100 Golf Course Rankings always divides opinion – one man’s heathland is another man’s links – and I won’t get drawn into justifying selections or the merits of the whole exercise, but there’s no doubt that determining the “best” and saying “27 is better than 28” will always be subjective. One thing is for sure though; the golf course itself is always a club’s greatest asset. Or is it?

Where am I going with this, I hear you ask! Well, whether it’s the sausages at Sunningdale, the stilton cake at Ganton, the lengthy lunches at Rye or the carvery at Tandridge, many golf clubs could justly claim to boast courses inside that are the equal of the course outside. Some might even go as far as to admit that it’s their cuisine that’s pulling in the members and guests and not the course itself.

As an example, I recall once overhearing a particularly seasoned golfer explain how his idea of the perfect day’s golf at Rye involved a quick dash round nine holes, followed by a leisurely lunch. When a challenge came demanding an explanation for playing only nine holes on this most magnificent of links layouts (Rye offers one of the finest golf courses in the country, in my opinion!) – the unapologetic response was that the joy of Rye, in his eyes, was principally in the delights of the dining room.

Of course, similar reputations can be found in the dining rooms of many other golf clubs, and even at the halfway huts of some of the most lauded names – Muirfield, The Berkshire, Sunningdale, Worplesdon, and I’m sure countless others.  When the high standards of catering extend beyond the walls of the clubhouse, you know you’re somewhere special.

So all this gets me wondering whether golf clubs do enough to advertise the standard of their catering among golfers and local residents.  I know some certainly do and attract visitors from far and wide for their Sunday roasts, but for those that don’t, perhaps the chef would rise to the challenge of perfecting a dish on which the club could stake – or perhaps steak – its reputation? 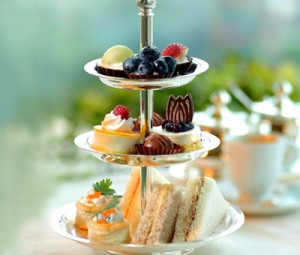 I’ll concede that as yummy as the bacon roll may be or however lip-smackingly tasty the ham, egg, and chips, they probably won’t have them queuing out the door.  But a renowned breakfast might bring in a few extra members before their morning round, or what about an afternoon cream tea fit for a queen to attract the ladies-that-lunch?  I could see a legendary dessert menu encouraging societies to opt for all 3 courses, and a highly regarded carvery might persuade numerous more members and their guests on the weekends.  Food for thought, perhaps?

Nobody expects the Michelin Restaurant Guide to include dozens of golf clubs in its 2013 listings, but if someone compiled a list of the ”Top 100 Courses (of Gastronomic Variety) at Golf Clubs”, I’m sure it would make an interesting read. Doubtless, as with the Top 100 Golf Course Rankings, they’d be the “usual suspects”, “hidden gems” and “exciting new entries” but I’m sure even the most venerated golf clubs would welcome the additional kudos of a high entry in the foodies’ guide to the best clubs. In fact, I quite fancy starting the research…..