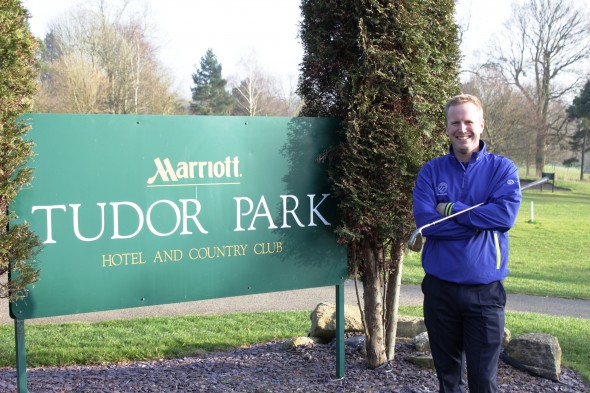 It is where he played his first round of golf at the age of 10, and where he developed the early desire to pursue a career in golf,  and later returned as a PGA professional.

As well as spending his school holidays with his friends playing golf, he competed with his father, ex-professional footballer Andy Ford, and brother Jon – where all three have their names on the board in the Tudor Park clubhouse for winning competitions. He also worked in the hotel’s concierge team in between studying for his degree in sports science.

Having qualified for the European Tour in 2015, the four-star hotel, also in Bearsted, has made Matt an honorary member so he can stay in training in between tournaments, using the gym facilities and practice on the 18-hole championship golf course .

“I have some very good memories from childhood of playing and practicing at Tudor Park with my friends – for us as young kids it was fantastic. It was great socially and competitive fun,” said Matt, 36. “I can still remember my very first round of golf there – it took me 125 shots to do 18 holes, but very importantly at that age, I beat my best friend by two shots.”

These days it takes Matt about half that on a good day to work his way round the course. However, his victory at the age of 10 could soon be beaten by his own children.  Matt’s five-year-old daughter, Teagan, a pupil at Thurnham Infant school in Bearsted, has already got the golf bug, taking part in the last two junior holiday golf camps, and bringing home a trophy. And the golf pro has taken his three-year-old son, Oscar, out onto the course to practise his swing, and he is just as keen.

“We are delighted to have Matt back here at Tudor Park and bringing his family with him,” said golf director, James Ibbetson. “We are sure his presence here will inspire our young golfers and regular members alike.”

Matt has already played nine events so far on the European Tour, with the highlight in March when he came second in the African Open – his close-fought battle with winner, Trevor Fisher Junior, was televised on Sky Sports.

In between the tours, Matt will make regular appearances at Tudor Park events, such as members days, but the big date in his calendar will be Tuesday, July 28, when ex-professional footballers compete in the Mancini Trophy. Last summer saw Glenn Hoddle and Ray Clemence among the 17 ex-pro footballers who competed at Tudor Park, and this year Matt will be the celebrity host for the day, if tournament dates allow.

To find out more, visit www.marriotttudorpark.co.uk  To stay up to date with golf events and Matt Ford’s appearances at Tudor Park, follow them on Facebook and Twitter (@tudorpark) Keep up to date with Matt’s progress by visiting his official website www.mattfordpga or www.europeantour.com.

Golf enthusiasts will also want to put these dates in their diary – Thursday, April 30, the closing date for entries to the Trilby Tour, and May 22 to July 29 when the qualifying rounds take place at Tudor Park. And don’t miss the regional final of the Trilby Tour on Thursday, July 30, which will be televised from Tudor Park.