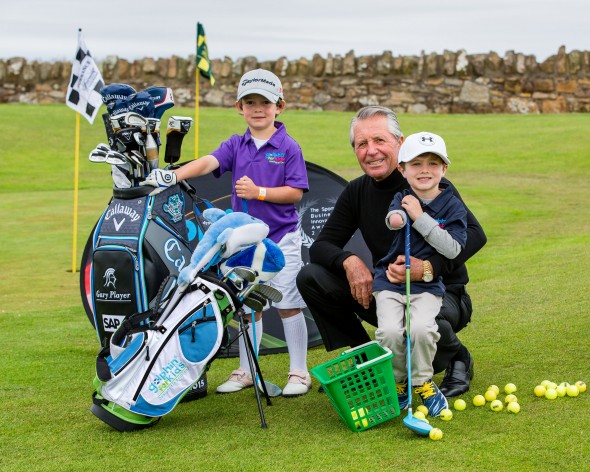 The names of the many Open-week visitors to Fairmont St Andrews, the five-star luxury resort at Scotland’s ‘Home of Golf’, read like a volume of Who’s Who, as the sport’s ‘movers and shakers’ took advantage of the venue’s outstanding facilities.

Not only was two-time Major winner Jordan Spieth at the resort as he prepared for his attempt on the third leg of a potential season grand slam, but three other Major winners also made the most of the five-star amenities.

Legendary nine-time Major winner Gary Player warmed up for his Champion Golfers’ Challenge at the resort and also spent time with youngsters participating in Fairmont St Andrews’ Golphinforkids festival. Tony Jacklin, the winner of two Majors and a successful Ryder Cup captain, was a popular visitor, while 1996 Open champion Tom Lehman also brought his family to the resort.

They were joined by another recent Major winner, who was just one of a number of competing players to base themselves at Fairmont St Andrews for the duration of the competition.

It wasn’t only the great and good of the fairways who could be seen at the resort, some of the most powerful figures in the golf industry were also present. Tim Finchem, the commissioner of the PGA Tour, and Ryder Cup director Richard Hills played the renowned Kittocks course the day before the Open began, while PGA secretary Suzy Whaley – the first women to be elected an officer of the PGA of America – was also relaxing at the resort before the ‘main event’.

And, while there’s no suggestion currently that either of Fairmont St Andrews’ two respected courses – The Torrance and The Kittocks – is under consideration as a future venue for the Solheim Cup, John Solheim – the chairman of PING, and son of the company founder and driving force behind the eponymous tournament, Karsten Solheim – played both courses while at the resort.

He said: “The Torrance and Kittocks courses are very enjoyable. They offer a good challenge but are very fair courses. It really is a beautiful place to play.”

And there were also regular sightings of familiar faces from both the big and small screen. Among them, Hollywood actor Will Ferrell, star of the Anchorman movies, who played the Kittocks course, which had remained open while the Open Championship was halted because of the weather. And popular TV golf and sports presenter Dan Walker tweeted pictures to his 380,000-plus followers during his round at the resort.

John Keating, Fairmont St Andrews‘ general manager, said: “It seemed that everywhere we turned during Open week there was a well-known face and it’s testament to the work of everybody at the resort that they choose to stay at, or visit, Fairmont St Andrews.

“It wasn’t just the ‘great and the good’ at the resort though. We had 100 per cent occupancy throughout the week as golf fans from across the world flocked here to take advantage of our privileged location and complimentary shuttle into town.

“It was a fabulous week for everybody concerned and we’re already taking provisional repeat bookings for 2020, should the Open return, as expected, to St Andrews.”

Voted IAGTO’s European Golf Resort of the Year in 2012 and winner of the award for ‘best large hotel’ in the 2014 Scottish Golf Tourism Awards, the resort boasts two championship golf courses – The Torrance and The Kittocks – and has played host to a number of prestigious events, including both the Open Championship’s final local qualifying and the Scottish Senior Open, which it hosted for six years between 2009 and 2014.