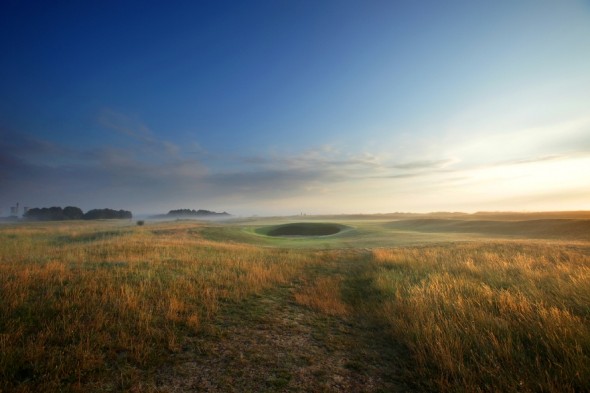 Golf in Kent in south east England will showcase its great golf offering of some of the finest golf courses in England, its easy access from Europe and the rest of the world via excellent transport links and its wealth of off-course attractions at this year’s IGTM, the world’s premier golf tourism show, in Tenerife in early October.

With a long tradition of golf, Kent is proud to have staged 17 Open Championships since 1894 over three of the most revered championship links in southern England, namely Royal St George’s, Royal Cinque Ports and Prince’s. In fact Royal St George’s in  Sandwich has been awarded The Open Championship an incredible 17 times,  most recently in 2011 when Irishman Darren Clarke won; Royal Cinque Ports in nearby Deal held the only major staged in Britain in 1909 and 1920 whilst Prince’s was the venue for this prestigious event back in 1932.

Indeed Royal St George’s is the only course in the south of England that is on the current Open Championship roster.

Not far to the north of this mouth-watering trio is North Foreland and to the west lies Littlestone, both Final Open Qualifying Courses in 2011, and both of which have also played their part in Kent’s rich golf history that dates back over a century.

The county is also home to a host of fine inland courses such as the London Golf Club, ideally located just 40km from central London, whose two championship courses were designed by Jack Nicklaus. Testament to the quality of its International Course, the London Golf Club hosted the Volvo World Match Play in 2014 whilst the members-only course, Heritage, was the Home of the 2008 & 2009 European Open.

Hever Castle meanwhile offers a picturesque parkland layout, chosen as the venue for a PGA EuroPro tour event in 2010, and excellent accommodation in the Astor Wing of the Hever Estate that is clothed in ancient history and royal associations.

Elsewhere in Kent a treasure trove of hidden gems like Tudor Park Marriott, designed by Donald Steel, the rolling parkland track of Lullingstone Park and Pentland Golf’s two courses at Boughton and Etchinghill, both set in the county’s rolling landscape offering stunning views of the Kent countryside.

“There is something for every golfer in Kent and the east coast in particular presents a unique challenge with the inclusion of three Open Championship venues in under four miles of rolling dunes and wild coastline. Greats such as Vardon, Jones, Cotton, Nicklaus, Lyle and Norman have all taken on the challenge of the Open links and triumphed. In the rest of Kent, the inland and parkland courses offer golf over the county’s verdant, undulating terrain with spectacular views over its picturesque countryside,” comments Tim Checketts, Secretary at Royal St George’s.

“Great golf combined with everything else Kent has to offer in abundance makes our county an excellent, all-round golfing destination.”

The county’s entry points from Europe via the port of Dover and Eurotunnel as well as its close proximity to the capital of London and its international airports of Gatwick, Heathrow and Stansted ensure easy, quick access for golfers from the continent and the rest of the world. Once in Kent, its complex motorway network makes for smooth, efficient travel around the county.

As England’s oldest county, Kent has a huge variety of off-course attractions that are plentiful in terms of history, heritage, ancient monuments, gardens and national parks that are all set within a natural and varied landscape. Its most iconic landmarks include Canterbury Cathedral, Dover, Hever and Leeds Castles, the Vita Sackville-West gardens at Sissinghurst and the Shepherd Neame Brewery at Faversham which is Britain’s oldest brewery.

Kent also greets the visitor with a wide range of accommodation from boutique hotels to coaching inns, B&Bs to resort hotels that are ideal for travelling golfers.

As well as sleeping well, you can also eat well in Kent too. Traditionally known for Dover Sole and Whitstable Oysters, the ‘Garden of England’ is fast developing a name for itself as a gastronomic destination and producer of fine wines to go with its long-standing tradition of producing home-grown fare and traditional ales.

This combination of offerings from Kent has earned the county its reputation as ‘A golfer’s paradise in the ‘Garden of England’’.

For further information on its courses, accommodation and off-course attractions, weekend breaks and longer golf tours from two to six days, which can easily be booked directly through the site or tailored to suit individual requirements, visit www.golfinkent.co.uk  and for more on the attractions of Kent, visit www.visitkent.co.uk  To keep in touch on a regular basis, follow @GolfInKent on Twitter.