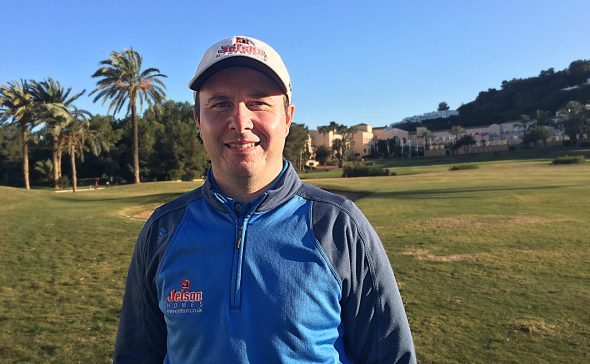 A dominant performance from Leicester star Cort saw him secure his first PGAs of Europe Sanctioned Pro-Am victory adding to his previous PGAs of Europe wins in the form of the 2015 Golfbreaks.com Fourball Championship and 2015 PGA Professional Championship of Europe – an excellent hat-trick of wins in just over 13 months.

“I feel pretty chuffed – it was really tough out there with the wind picking up on the back nine, and going out with a lead is always interesting as you don’t know whether to attack or defend,” said Cort.  “But I played solid, especially on the back nine when the wind got up so I’m pleased with how I finished.

“I’ve got a few big things this summer to look forward to so every time you win it’s great for your confidence so I can use this win to hopefully push forward and get some results as well.”

With Cort holding a three-shot lead at the beginning of the day, and with the rounds starting in near perfect sunny and calm conditions, it seemed that good scores were a possibility on the championship South Course at the resort named as ‘Spain’s Best Golf Hotel’ at the 2015 World Golf Awards, and a close contest was on the cards.

This proved to be the case after uncharacteristic bogeys for Cort at the first and fifth holes and a birdie four on the fourth for Craig Shave (PGA of GB&I) saw the cushion evaporate.

But two birdies at the sixth and ninth steadied the ship and saw Cort return to the top of the leaderboard with a two-stroke advantage, which was not threatened by the chasing pack for the remainder of the round.

As the wind picked up, scoring became tougher and, although a further birdie by Shave at the 13th closed the gap, two late bogeys gave the advantage back to Cort who never wavered from his position at the top of the leaderboard from round one, finishing at five-under (212) for the tournament.

“It’s a great complex here at La Manga Club,” added Cort.  “Some great courses…it’s nice to stay onsite and the hotel’s been great, and food’s been excellent.  The weather has been nice with a bit of wind, which made it interesting, but much better than back home so it’s a good chance to get some practice in – it’s been ideal.”

Shave finished in second place courtesy of a solid closing level par 73 to finish on a tournament total of 216 (-1), followed by the PGA of Italy’s Nicolo Gaggero at six-over par (223) in third place.

A nine-point swing on the final day saw Cort secure a memorable double with victory in the team pro-am event as well. Assisted by amateurs Brendan Delaney, Maurice Addison and Gary Britton, a high scoring back nine of 45 points (-9) and a closing round total of 84 points (-12) saw them soar to the top of the leaderboard where they finished with an excellent total score of 249 points (-33).

In second place was the team led by Brendan McGovern (PGA of GB&I) with amateurs Ronan O’Reilly, Jonathan Toms, and Marcus Burnley, who had held the lead heading into the final round.  A closing 75 (-3) saw them surrender their position at the top, however it was good enough to finish seven points clear of the team of PGA of Czech Republic professional, Steve Bradley, and amateurs Tony Parrish, Michael Wantulok, and Mark Shaw.