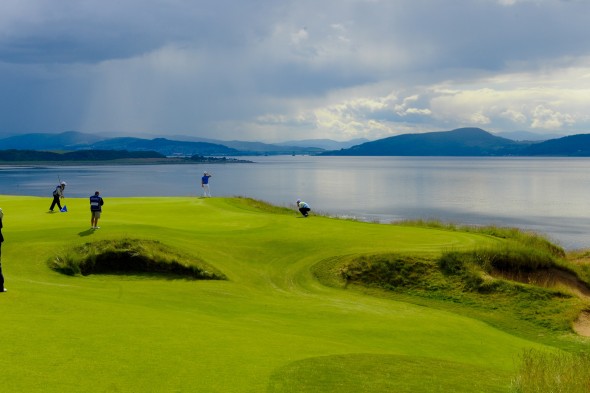 The course management team at Castle Stuart Golf Links are going to great lengths – and sometimes depths – to put some changes in place for the 2016 Aberdeen Asset Management Scottish Open this summer.

Two new bunkers have been created at 320 yards on the 560-yard sixth hole to give professionals and caddies a new strategic challenge. Areas of rough have been bulked out and new fairway lines adopted on holes six, seven and 18 to further tighten the course.

Castle Stuart, which has hosted three previous editions of the Aberdeen Asset Management Scottish Open at the Moray Firth links from 2011-2013, made the changes following discussions with The European Tour.

Visitors will get a chance to ‘test drive’ the changes ahead of the professionals when the course opens for the 2016 season on 25 March.

Chris Haspell, the course manager, said: “The new bunkers on the sixth hole will come into play for golfers playing with an easterly wind. It will also narrow the fairway to 25-27 yards so it will give them a new challenge.

“It will still be a two-shot hole for them but the second shot will be a long iron now into a tricky green so they will have to think more strategically.

“The other changes will bring new tests for all players and, in some cases, make them alter the way they play these holes.”

He added: “The course management team here have done a fantastic job in implementing these changes which will present the players with new challenges without reducing the par.

“And if the wind blows it could prove an even tougher test for the players who will have the full links golf experience. As always, the best golfer will win anyway in the end.”

As well as changes to the course, Chris and his team have also cut back areas of gorse to improve spectator access ahead of the event, which will be held from 7-10 July.

More than 65,000 people attended the Aberdeen Asset Management Scottish Open when it was last held at Castle Stuart in 2013, and it is hoped attendances will top 70,000 this year. Tickets can be booked here.

Knox says a victory on his home soil of Castle Stuart is just as exciting a prospect as making his debut in The Masters next month.

Mickelson cited his 2013 win at Castle Stuart as a key component in his victory in The Open at Muirfield a few days later, and is aiming for another Scottish double this year by competing in the Highlands ahead of playing at Royal Troon.

Mickelson said: “I’m always excited about returning to Scotland, and particularly to Castle Stuart. I believe winning there in 2013 was key to my success the next week at The Open Championship.”

Stenson, who followed his third place at Castle Stuart in 2013 with a runner-up finish behind Mickelson at Muirfield, said: “Castle Stuart doesn’t beat you up as much as an Open Championship venue does, (but) it’s still great to get into the mind-set of playing links golf.”

McDowell said the Aberdeen Asset Management Scottish Open is part of an exciting trio of tournaments, also including the French Open and The Open Championship, this summer, adding: “I’m looking forward to making my return to Castle Stuart this year.”