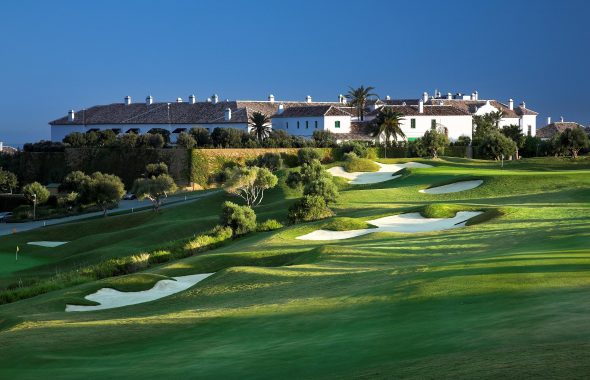 The multi-award-winning, independent, five-star Finca Cortesin – one of Europe’s leading golf resorts – has joined World of Leading Golf (WLG), the international organisation representing some of the world’s best golf venues.

Located just inland from the Malaga coast, and set in a 532-acre estate, Finca Cortesin’s 6,802m, par-72 championship course opened in 2007 and is ranked as one of Spain’s best. Designed by Cabell B Robinson, it makes the most of its natural Mediterranean landscape and includes 20 varieties of flora and a forest.

It hosted the Volvo World Match Play Championship for three years – 2009, 2011 and 2012 – and was ranked 30 in Golf World‘s benchmark 2015 European top 100 courses list. It incorporates a Jack Nicklaus Academy and offers a golf-club valet and cleaning service, state-of-the-art practice facilities, buggies with the latest GPS technology, and an on-course buggy bar for ice-cold drinks.

The hotel is inspired by traditional Andalusian architecture and is built around two large courtyards. It offers 67 large, exquisitely designed suites, a luxurious spa, three pools, tennis and paddle courts, outstanding cuisine, expansive landscaped gardens and an ambiance of tranquillity, elegance and refinement – a combination which has previously earned it the title ‘best resort’ in Spain, from Conde Nast Traveller magazine.

Finca Cortesin’s two predominant restaurants are El Jardín de Lutz, with its traditional Spanish cuisine, and the Michelin-starred Kabuki Raw, which, in addition to its pure orthodox Japanese dishes, offers others that have emerged as a result of Japanese and Mediterranean influences.

The whole experience is rounded off by an impressive 6,000m² beach club, located conveniently in the Bahía de Casares beach, just a kilometre from the hotel, and a selection of one-of-a-kind real estate opportunities, including some exceptional villas with exquisite golf and sea views.

Finca Cortesin’s director of golf, Francisco de Lancastre, said: “We are delighted with the opportunity to join the network of World of Leading Golf. We have seen with interest the growth of this association in the last couple of years and, by joining the club, we are certain it will add value to our membership. We are also looking forward to welcoming the members of other partner clubs to experience our golf course and resort in the years to come.”

Claus Feldt, WLG’s chief executive, added: “We are naturally pleased to welcome Finca Cortesin to WLG. It is a venue which is renowned, not just in Spain, but across Europe, for the quality of its facilities and service, both on and off the course. It illustrates further the values inherent in WLG and what we, as an organisation, and our members in general, are looking to achieve.”

WLG and its member clubs are passionately committed to preserve golf culture, but not only by heeding to such things as rules, dress code and etiquette – they commit to the very highest of quality standards concerning the design and caretaking of golf courses and services, as well as the levels of ambiance and gastronomy.