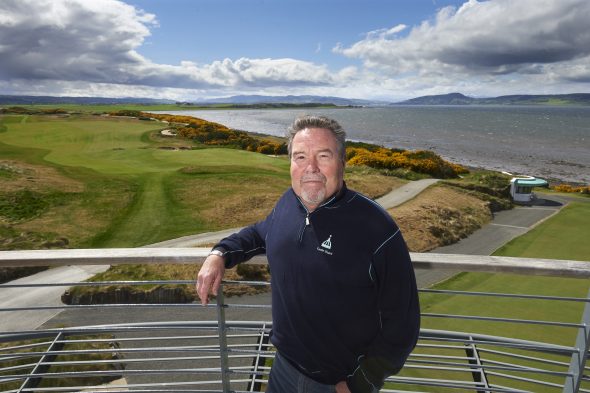 The co-designer of this year’s Scottish Open venue wants to help attract more people into golf by speeding up play and making courses less punishing and more enjoyable.

Mark Parsinen, who is also a managing partner at Castle Stuart Golf Links, near Inverness, which hosts the Aberdeen Asset Management sponsored event next month, wants courses designed, built and prepared to challenge professionals but also be engaging and playable for amateurs of all standards.

Parsinen said that over the last 40 years perceptions have changed on what makes a good golf course, with many supporting the idea that  ‘if it isn’t difficult it can’t be good’.

But he said changes are needed with recent statistics showing that golf club membership in Scotland has fallen by 17 per cent since 2004 and a growing number of courses are closing, with high costs and length of playing time among the reasons cited.

In an article for a re-launched Castle Stuart website – www.castlestuartgolf.com Parsinen said: “Every 48 hours a golf course closes in the US. People don’t want to spend their spare time looking for balls and being humiliated.

“Golf courses have evolved to have faster greens, narrower fairways, much longer rough, and more penalty-laden ‘hard edges’.  Golfers have been facing increasingly difficult courses and challenges that are all too often humiliating and costly, both in time and the cost of lost balls.”

He said the 1974 US Open at Winged Foot marked a ‘sea change’ in perspective of golf courses.  “Brutal rough, added length, and the general setup, including ‘rock hard’ fast greens, made the course difficult almost beyond comprehension.

“Even the press asked why the USGA was trying to embarrass the best players in the world.  ‘No,’ responded Sandy Tatum, then head of the USGA’s championship committee.  ‘We’re trying to identify them.’  Hale Irwin’s winning score was 7 over par.”

Parsinen added: “The logic that difficulty in golf is the way to identify the best players isn’t entirely true, although it has held sway ever since Winged Foot – to the dismay of the average golfer after a protracted and almost unnoticeable trend toward difficulty becoming the ‘be all and end all’ of golf design.

“Over more than 40 years, our perception of what golf is all about has changed. How has golf turned into this torture thing?

Castle Stuart opened in 2009 and has since hosted the Scottish Open on three occasions and will again stage the event on 7-10 July.

The 2013 champion Phil Mickelson said his preparation at Castle Stuart was key to his success the following week when he won The Open Championship at Muirfield, adding that “It should almost be a pre-requisite to play Castle Stuart before you are allowed to design golf courses”.

Castle Stuart’s ethos is based around four key points on course set up to help improve pace of play – rough, carries, green speed and pin positions, and bunkers.

‘Findable’ rough cuts down the time players spend looking for lost golf balls, eradicating carries reduces the fear factor in the average player and avoids them having the ball ‘in-pocket’ too often. Fair pin positions, greens that are not too quick and fewer bunkers can also help speed up play.

Parsinen added: “If people think golf is all about a difficult test and proving your mettle, then in that crucible they will suffer pain because they think it may be inevitable.

“But you can change the paradigm of golf and say ‘I don’t need to be playing the most difficult courses in the world.  I need to find some engaging pleasure. I know I’m fallible. I make mistakes.  And, why shouldn’t I cherish playing a golf course that gives me real chances for something good to happen, allowing some ‘fun’ even in the face of inevitable fallibility?”