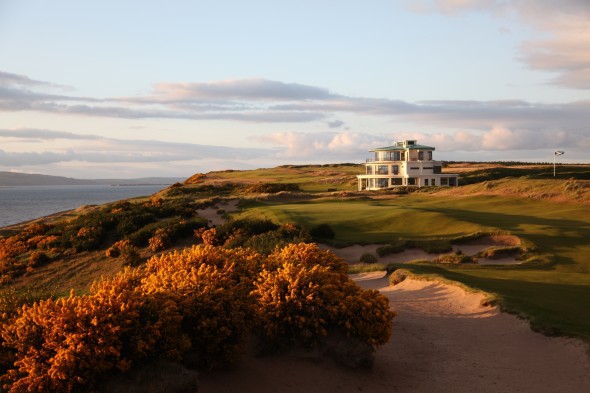 The challenges presented by the Scottish weather to golf course managers – highlighted at this year’s Scottish Open – will be discussed by an international audience at Castle Stuart next week.

The acclaimed links course near Inverness staged the Aberdeen Asset Management-sponsored European Tour event in July for the fourth time in six years.

The opening day of the tournament was hit by gusts of 43mph which led to balls oscillating on the greens. The course management team had to avoid cutting to stop the balls moving on the putting surfaces during the worst conditions to allow play to continue, while at other times cutting was necessary to maintain green speeds.

It was a steep learning curve for the 46-strong army of volunteers, gathered from across the world including Australia and New Zealand, to augment Castle Stuart’s usual team of 14 during the event.

The team’s preparations, and the challenge of constantly changing conditions during the event, will be outlined by Castle Stuart’s course manager Chris Haspell at the Leading Edge conference, held in conjunction with GEO (Golf Environment Organization) and featuring the Emirates Golf Club, PGA Catalunya and the turf equipment manufacturer, Jacobsen.

Castle Stuart tests 55 species of fescue grass on site to select those that best suit different climates, need the least water and are the most disease-resistant. Their results are sought after by courses across the world, including last year’s US Open venue, Chambers Bay.

Delegates at the conference on 20 and 21 September will hear how this testing regime, along with cutting heights and use of state-of-the-art machinery can make play possible in severe conditions while keeping the grass healthy.

Chris Haspell said: “This year’s Scottish Open was a real learning experience for many of the volunteers working on a Scottish links course for the first time on a large event in challenging conditions. But we managed to keep play going and received good feedback. The team learned a few things which they took back to their own courses in different parts of the world.”

Created by Mark Parsinen, co-designer of Kingsbarns Golf Links, and Gil Hanse, the man behind the 2016 Olympic course in Rio, Castle Stuart’s philosophy of making golf enjoyable and engaging, but still challenging to players of all abilities, has won it plaudits from some of the world’s leading players.

Stuart McColm, Castle Stuart’s general manager, said: “Our belief is that we can test the best without making the course too punishing for players of lesser abilities and make the whole experience more enjoyable.

“Giving golfers more opportunities to keep the ball in play – and find it when they don’t – and the ability to make more putts on greens that are not too fast, makes the overall experience more memorable.”

Delegates at the conference, which also includes talks by Dr Thom Nikolai, renowned professor of turfgrass agronomy at Michigan State University, and GEO, will have a chance to hold networking events and play the Castle Stuart course.

Nick Brown, International Corporate Accounts Manager at Jacobsen, added: “The concept of the Leading Edge Series is different from other events. Usually, club managers and course managers have separate networking and educational events, but Leading Edge enables both to interact with their counterparts from across Europe, in a convivial and relaxed environment.

“Jacobsen is extremely proud to be working in conjunction with Castle Stuart Golf Links, PGA Catalunya, GEO and Emirates Golf Club. We are set for another exciting and educational Leading Edge event.”