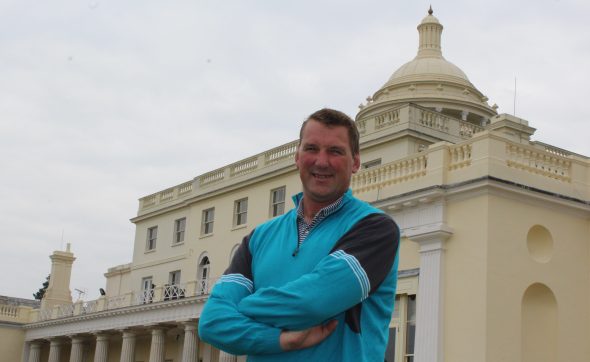 Pinsent, 45, wrote his name in British sporting history when he won rowing gold in four successive Olympic Games between 1992 and 2004, having already won nine golds in the World Championships, and was subsequently knighted in the new year’s honours list of 2004.

Three of his Olympic golds were won in tandem with Sir Steve Redgrave, and it was his rowing partner who introduced Pinsent to golf in 1990. A little more than two decades later, Pinsent was asked to take on the presidency of Stoke Park Country Club, Spa & Hotel, one of just two five-AA Red Star golf clubs in England.

He recalled: “I came to Stoke Park and played in a few charity golf days. I remember Tim Henman had a charity day here around 2001. I came here as a guest and got to know the place well.

“I already knew (director of golf) Stuart Collier, and Chester King (Stoke Park director) then asked me to be president of the club. Of course, I agreed, and we started coming down as a family. My sons go to school very near and we can come down and use the facilities. I get them hitting a few balls every now and then.

“It’s been good to get to know some of the members for the midweek roll-up and to be involved with the prize-giving nights and we had a big fund-raiser for the Prince’s Trust and the Duke of Edinburgh Awards.

“The recent changes to the course are fantastic. I think it’s testament to Chester and the King family. They are totally involved with the place and the level of investment they have put in is extraordinary.

“I just love the place. It’s been an honour to be president. You look at the board and see the others who have done it and think ‘wow!’. It’s been wonderful.”

As one sporting legend famed for his strokes leaves office, another stroke-maker takes his place, with the former England cricket captain, Andrew Strauss, picking up the mantle in 2017.

Stoke Park’s director of golf, Stuart Collier, said: “It’s been an absolute delight to have Sir Matthew as club president for the last five years. As a sports fan, it’s always been a thrill to be in the presence of such a British Olympic legend – but it’s also a joy knowing him and his lovely family on a personal level.

“He’s been a very active president, immersing himself in the many events and fundraisers we have here at Stoke Park and was hugely popular with the members. Hopefully, he will continue to be an active member in his ‘retirement’.”

Set within 300 acres of beautiful private parkland estate in Stoke Poges, Bucks, Stoke Park is only 35 minutes from London and seven miles from Heathrow Airport. Laid out across 300 acres of mid-19th century, Lancelot ‘Capability’ Brown-landscaped parkland, the 27-hole golf course was designed by the legendary Harry Colt in 1908.

It is one of just two five-AA Red Star golf clubs in England and the historic land on which it stands is recorded in the Domesday Book of 1086. The historic course played host to the PGA Matchplay in 1910 and, even more famously, the golf match between Sean Connery’s James Bond and Auric Goldfinger, in the 1964 film, Goldfinger. It also has a thriving golf club with around 800 active members.

During the winter of 2015/16, every bunker on the Colt course – the first nine holes of the historic 27-hole layout – underwent major renovation to both shape and size, as part of a seven-figure investment in a facelift of the whole course. And this winter will see a similar overhaul of the Alison course – holes nine to 18 – as Stoke Park looks to bring the second nine into line with the aesthetic quality and playability the front nine now enjoys.