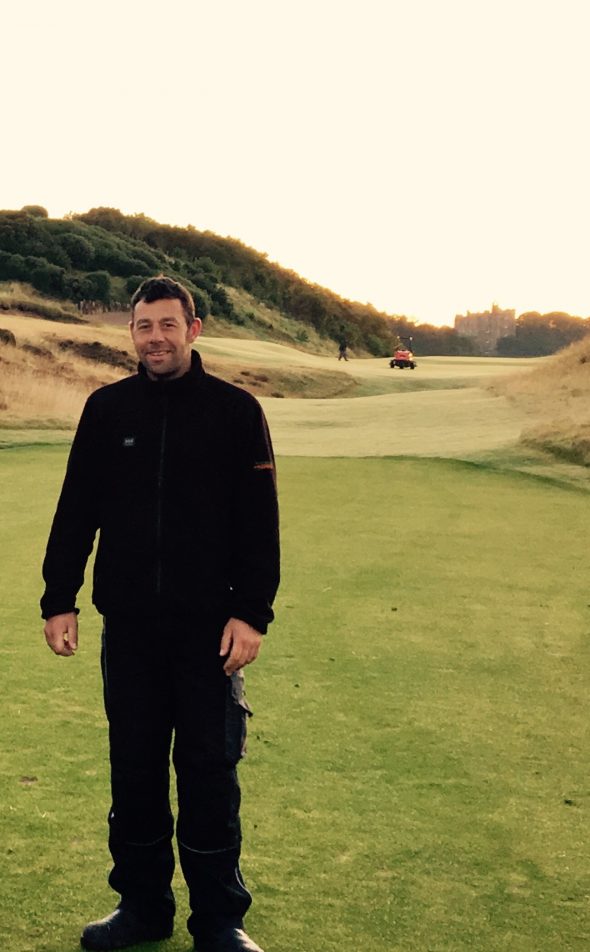 The internationally-renowned Castle Stuart Golf Links has appointed James Hutchison as head greenkeeper as it seeks to build on its reputation for sustainable and environmentally-friendly course management.

James, who joined Castle Stuart as a greenkeeper during its construction in 2007, has been deputy course manager since the four-time Scottish Open venue opened in 2009.

He replaces Chris Haspell who is leaving Castle Stuart to take up a new post within the industry. Senior greenkeeper Stuart Hawker is the new deputy head greenkeeper.

During his time at Castle Stuart, James helped create the famous links overlooking the Moray Forth while safeguarding the environment and the rich wildlife it supports.

The course – designed by Mark Parsinen, who also co-designed Kingsbarns Golf Links, and Gil Hanse, creator of the Olympic course in Rio and the new Black Course at the Streamsong Resort in Florida – has won awards for its protection of the landscape and marine areas that make up a Special Area of Conservation and Site of Special Scientific Interest.

James has worked on all four Scottish Opens at Castle Stuart – from 2011-2013 and in 2016 – and has played an integral role in developing the course, regarded as a modern icon at the forefront of discussions on the playability of golf courses that challenge the best players and makes the game engaging, enjoyable and fun for higher handicappers.

His first major event at Castle Stuart in his new position will be the Highland Golf Links 54-hole Pro-Am sponsored by Blue Group, a Tartan Tour tournament which will feature a capacity field of 80 teams. The three-day event, which runs from 2-4 October, will also be played at Royal Dornoch Golf Club and The Nairn Golf Club.

James is also expected to be in charge of the Castle Stuart greenkeeping team that will work on a second championship course, which is being planned in partnership with the Arnold Palmer Group.

James said: “This is a huge and exciting challenge for me. It was fantastic to work at Castle Stuart from the construction phase, and being able to do the same on a second course is such a massive opportunity.

“What makes the job so enjoyable is creating and developing a course that works with the environment and provides a visual experience as well as being playable by golfers of all abilities.”

Stuart McColm said: “James has been an integral part of the Castle Stuart team almost since we cut the first turf and the time is right for him to take us into the next phase of our evolution.

“Chris’s departure has left a strong agronomic and environmental platform, one that James and I are passionate about and determined to improve upon, in our pursuit of increased customer satisfaction as well as sustainable environmental stewardship.”

Castle Stuart underlined its environmental credentials this month when it hosted the latest event in the Leading Edge series of conferences. The event brought together a number of course and club managers to look at the challenges and successes of running golf clubs in challenging conditions worldwide.