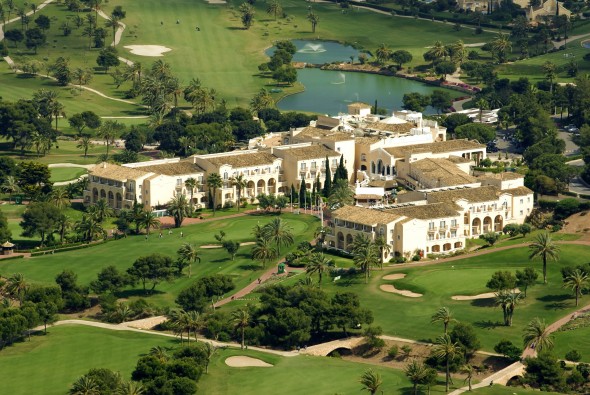 Spain’s iconic La Manga Club resort is targeting its most successful year ever after being shortlisted for five top global travel honours later this year.

The resort in Murcia, south-east Spain, is famous across the globe for its extensive array of sports and leisure facilities, and is a leading contender in two categories at the 2018 World Travel Awards, and another three for the 2018 World Golf Awards – which will be hosted by the five-star venue in November.

The resort’s hotel has also been shortlisted to be named as ‘ Spain’s Best Golf Hotel’ at the World Golf Awards for the second year running, while La Manga Club has high hopes of retaining its title as ‘Europe’s Best Golf Venue’ and also for its South Course winning the award for ‘Spain’s Best Golf Course’.

Nick Montgomery, general manager of La Manga Club’s hotel, spa and food and beverage division, said: “These are exciting times at La Manga Club, and to be shortlisted for these five top awards is testament to the high esteem that the resort continues to be held in in the global travel and golf markets.

“La Manga Club is a name that’s synonymous across the world and recognition of this kind, together with hosting events like the World Golf Awards, will help keep the resort at the forefront of the travel industry.”

The World Travel Awards are recognised globally as the ultimate hallmark of quality, with winners setting the benchmark to which all others aspire. Voting for the Europe region is open until May 20.

Returning to La Manga Club for a second consecutive year, the World Golf Awards have quickly risen to be regarded as the most prestigious awards programme in the golf tourism industry and will take place from November 1-4.

Attendees will enjoy three action-packed days of unrivalled networking events, dinners and exclusive golf experience activities, with the highlight of the event coming on Saturday 3 November, where golf tourism figureheads and market leaders from around the world for a glittering gala dinner and prize-giving ceremony.

Three times the size of Monaco and nestling in an exclusive corner of Murcia, La Manga Club has set the benchmark for European sports and leisure resorts since opening in 1972, and the award nominations are further recognition for the venue’s continued investment in its facilities – including the opening of a new Chelsea FC Foundation Soccer School this month.

The resort’s popularity has been reflected in the number of other honours it has received recently – including being voted ‘Spain’s Best Golf Hotel’ by UK readers of Today’s Golfer magazine for an amazing seventh year in a row – while it will host Spain’s Federation Cup knockout tennis tie against Paraguay from April 21-22.

Also the official overseas training base of the Lawn Tennis Association (LTA), La Manga Club’s unrivalled facilities include three 18-hole golf courses, a 28-court tennis centre, a new European Cricket Performance Centre and a 2,000sqm Wellness Centre. In addition, it features the choice of a five-star hotel, four-star serviced apartments and townhouses and more than 15 bars and restaurants.

Voting for the 5th World Golf Awards is open until September 20. For more details about the event and to vote for La Manga Club, go to http://worldgolfawards.com/nominees/2018