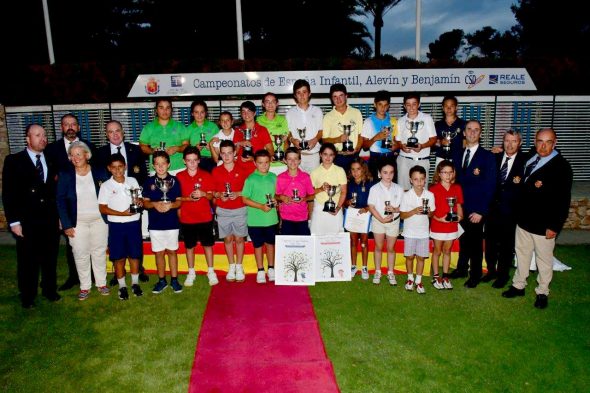 Boasting a roll call of past winners including José María Olazábal and Carlota Ciganda, the Spanish Junior Golf Championship occupies a prime place on the country’s golfing calendar, and Spain’s  latest generation of stars turned out in force for the 2018 event at La Manga Club last week.

More than 380 boys and girls from all over Spain and beyond gathered at the iconic resort in Murcia, south-east Spain, for three days’ competition on its three acclaimed 18-hole golf courses.

Real Golf La Manga Club has the privilege of hosting the event every two years and was staging the championship for the 10th time in its history. Competitors were divided into six different categories – boys and girls aged 13-14, 11-12 and 10 and under, with the resort’s renowned South Course being used for the oldest age group, the North Course for the 11 to 12-year-olds and the West Course for the youngest players.

Competition was as fierce as ever at this year’s event – which first took place in 1947 – with Álvaro  Portillo and Álvaro Revuelta providing one of the main highlights as they fought out a memorable head-to-head battle in the oldest boys’ category played.

The pair, who finished ten strokes clear of their nearest challenger, could still not be separated after 54 holes before two-handicapper Portillo sealed victory with a birdie in the sudden-death play-off.

Iran’s Minoo Mousavi claimed a comprehensive five-shot victory in the girls’ equivalent event from Paula de Francisco while Álvaro Gómez de Linares and Anna Cañadó proved too strong for their rivals in the boys’ and girls’ 11-12 age group.

And in the youngest age category, Ignacio Laulhe and Martina Navarro earmarked themselves as future names to follow after romping to victory by six and seven shots respectively.

Eduardo Ruiz, general director of sports at La Manga Club, said: “We frequently host prestigious golf tournaments at La Manga Club but this one has a special place in our hearts as it is where the young golf prodigies of our country come together. All in all, it is a great honour that the resort has been selected to host this competition every two years.”

La Manga Club has been firm favourite with golfers for more than four decades, with its facilities including three 18-hole courses, a nine-hole academy course and outstanding practice area.

The official overseas training base of the Lawn Tennis Association (LTA), the resort’s extensive other facilities include a 28-court tennis centre, a new European Cricket Performance Centre and a 2,000sqm Wellness Centre. In addition, it features the choice of a five-star hotel, four-star serviced apartments and townhouses and more than 15 bars and restaurants.