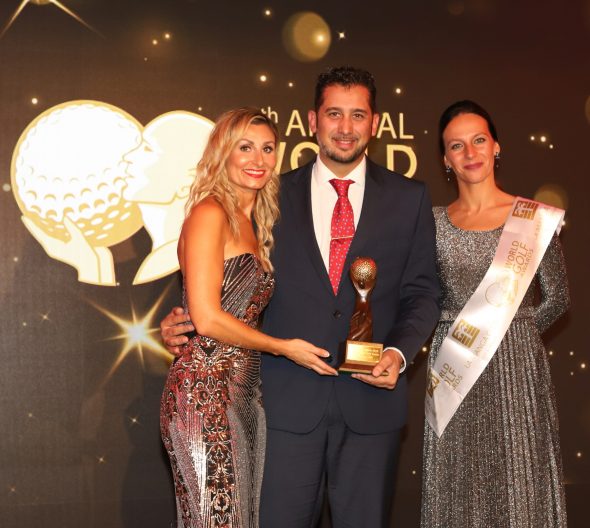 Spain’s La Manga Club celebrated its past and present after enjoying a memorable night of success at the 2018 World Golf Awards, which included being named ‘Europe’s Best Golf Venue’ for the second year in a row.

The iconic sports and leisure resort was hosting the event for the second year running and was one of the big winners at the lavish prize-giving ceremony, with its five-star Hotel Principe Felipe being voted ‘Spain’s Best Golf Hotel’ for the fourth time in the last five years.

In an extra special moment for La Manga Club, there was also a nod to the resort’s illustrious history with nine-time Major winner Gary Player – who was La Manga Club’s first director of golf in 1972 – being named as ‘Golf Course Designer of the Year’ and also being the recipient of the ‘Lifetime Achievement Award’ for his services to the game in a career which has spanned seven decades.

The latest accolades help to complete another year of success for the Murcia venue, with other notable honours including being voted ‘Europe’s Leading Sports Resort’ for the first time at the 2018 World Travel Awards and being named in a select group of global venues to receive a Golf Digest ‘Editor’s Choice Award for Best International Resorts 2018 for the second successive year.

“Last year’s show helped to create a huge buzz around the resort, we received some outstanding feedback and it was great to see many familiar faces returning. The event was another fantastic opportunity for us to demonstrate our world-class golf, sports and lifestyle facilities to a key global audience, and to win two of the top honours capped off a memorable three days.”

Regarded as the most prestigious awards programme in golf tourism, this year’s awards – the fifth time that they have been held – brought together some of the famous names in the game and industry leaders from all over the world, as well as local dignitaries including the development director for the Region of Murcia, Patricio Valverde, Jose Jover, president of the Murcia Golf Federation, and figures from the La Manga Club community.

Representatives from 43 countries gathered at La Manga Club from November 1-4 for three days of unrivalled networking events, dinners and exclusive golf-experience activities – with the prize-giving ceremony providing a fitting finale.

Guests had the opportunity to take full advantage of La Manga Club’s outstanding facilities – the resort features three 18-hole golf courses, a nine-hole par-47 academy course and an outstanding practice area and driving range – with the event programme including golf on the West and South courses and a networking dinner.

Chris Frost, managing director of the World Golf Awards, said: “La Manga Club has proven a world-class host on what has been a magnificent evening of triumph for the golf tourism industry. We have had the privilege of recognising the leading golf courses, hotels, resorts and tour operators from across the world and my congratulations to each of them.”

Set across an area of 1,400 acres in Murcia, south-east Spain, La Manga Club has set the benchmark for European sports and leisure destinations since its inception in 1972.

The official overseas training base of the Lawn Tennis Association (LTA), the resort’s other facilities include a 28-court tennis centre and 2,000sqm spa and fitness centre, while the resort also launched a new Chelsea FC Foundation Soccer School this year. In addition, La Manga Club features the choice of a five-star hotel, four-star serviced apartments and townhouses and more than 50 bars and restaurants.

For more information about the 2018 World Golf Awards, visit worldgolfawards.com and for a full list of winners click here and for images here. For further details about La Manga Club, go to www.lamangaclub.com