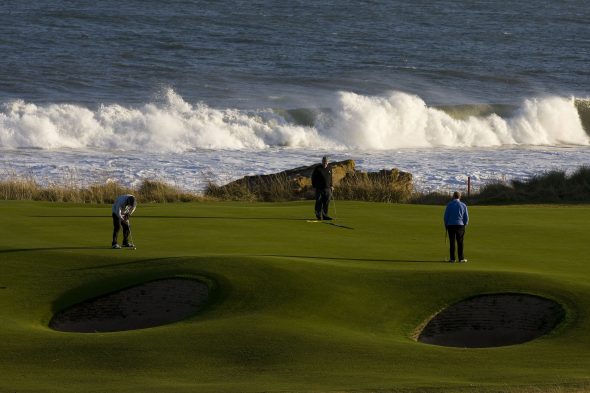 The famous course topped the list of the World’s Top 100 Golf Courses 2020, compiled by an extensive panel of industry leaders.

The panel said of Royal Dornoch: “Bordering the Dornoch Firth, the classic links land will offer you nothing but wild magnificent seas, skies, and mountains with ancient grass covering the dunes.”

Golfscape’s list includes eight Scottish courses, including the Old Course at St Andrews (ranked No 6) and the Ailsa Course at Trump Turnberry (15).

Royal Dornoch Golf Club general manager Neil Hampton said: “This is a fantastic achievement and a great tribute to everyone at the club who work hard to make our historic course a must-play venue for today’s golfers.

“The quality of the course and our history, including our links to Old Tom Morris and Donald Ross, is a winning combination.”

The Championship Course has also been ranked No 4 in the world in Golf Digest’s new Top 100 courses outside the US, by a panel that includes more than 1,700 North American golfers and more than 350 international players.

The panel said: “(American golf writer) Herbert Warren Wind called it the most natural course in the world. Tom Watson called it the most fun he’d had playing golf. Donald Ross called it his home, having been born in the village and learned the game on the links.

“Tucked in an arc of dunes along the North Sea shoreline, Dornoch’s greens, some by Old Tom Morris, others by John Sutherland or 1920 Open champion George Duncan, sit mostly on plateaus and don’t really favour bounce-and-run golf. That’s the challenge: hitting those greens in a Dornoch wind”.

In November, the Championship Course was ranked No 10 in GOLF magazine’s latest Top 100 Courses in the World list.

It was second only to St Andrews’ Old Course as the highest ranking of 13 Scottish courses to make the list and was the third highest ranked of the 30 courses in Great Britain and Ireland.