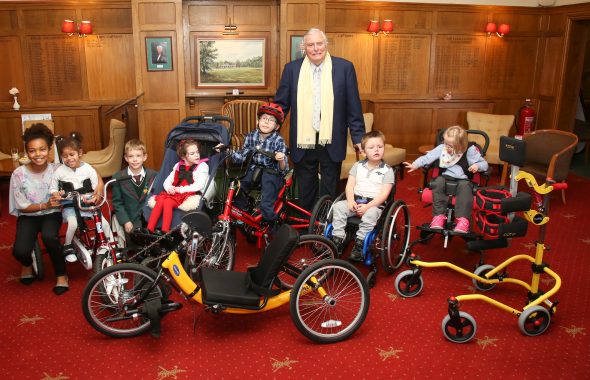 Charity was to the fore when a bumper £25,000 in cash donations and walking aids was handed out at a Dorset golf club.

Peter Alliss, the BBC’s ‘voice of golf’, and his wife, Jackie, were among the guests at the annual ceremony at Ferndown Golf Club.

The £25,000 was raised from the Alliss Invitational last September with £10,000 of the total allocated to the club’s 2018 captains, Robin Haycock and Pauline Baillie.

The youngsters attend Victoria, Montacute and Langside schools in Dorset.

Since its inception in 1987 the Alliss Invitational has raised £1.15 million and paid for more than 300 wheelchairs and walking aids.

“We’re now in our 33rd year. Who would have thought we’d still be here today,” Peter Alliss told guests.

She added: “I’ve been involved, together with Derek Silk, for 30 years. We give our time gladly because it’s a fantastic cause which really changes people’s lives.”

Places are still available for this year’s Alliss Invitational on Monday September 2.

A total of 24 teams will take part in the one-day event which will be followed by a charity auction. The cost is £650 per team.

Founded in 1913, Ferndown Golf Club is a 27-hole heathland golf course, ranked in the top three per cent of the world’s courses by Rolex.

It is also placed at 88 in Golf Monthly’s UK and Ireland Top 100 courses for 2019/20 while Golf World ranks Ferndown as one of the top 36 courses in England.

The club has a long and proud association with the Alliss family, including Peter Allliss who has described Ferndown as his favourite course.

Prestigious tournaments hosted at the club include the Hennessy Cognac Club, featuring leading players from the European Tour; the European Ladies’ Championship and the Women’s British Open.

Current British Women’s Open champion Georgia Hall joined the club as a nine-year-old when she was a 36-handicap. By the age of ten she got down to a 10 handicap and then set the course record of a five-under, 67 when she was 11. The record still stands today.