If dress codes and slow play aren’t the two most exhausted topics of clubhouse conversation then I’d like to know what are. Everyone has an opinion on the pros and cons of relaxing dress codes, but it’s slow play that’s in the headlines at the moment and is the major bug bear for golfers the length and breadth of the country. 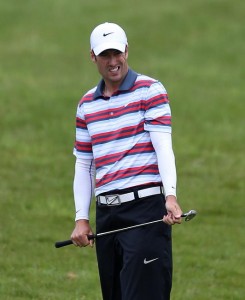 Speed is something that blights even the highest echelons of the game, with Jack Nicklaus recently adding his weight to the argument that slow play is wrecking the game.  Nicklaus said “I am very concerned about the game of golf because people will not take five or six hours out of their time“.  He added “The showcase of the game is taking too long,” stressing that it is influencing the way youngsters are playing.

On the PGA tours the authorities are trying to combat it – Ross Fisher was penalised a stroke at the Wales Open recently and on the LPGA, Morgan Pressel was docked a hole which cost her the Sybase World MatchPlay title – but it’s impossible to put people on the clock on a Sunday morning at their local club.  You might be driven to shouting down the fairway (heaven forbid) or pulling someone aside in the clubhouse for a quiet word afterwards, but that will never offer much of a long-term solution.

So, getting some personal gripes off my chest, here’s my take on some of the contemporary causes of slow play that perhaps need addressing.

Last week I shared my thoughts on golfers choosing to play from the Championship tees.  To my mind, there are too many mid to high handicap golfers playing from tees that don’t reflect their abilities.  Sorry if that sounds blunt or condescending, but it’s true, and the net result is that countless hours are spent searching for balls, taking extra shots to reach the green (or the fairway) and holding up all and sundry behind.  Competitions and special occasions only, please.  Perhaps tees should come with suggested handicap bands (something I have seen before on the Continent)?  We might even do away with “Women’s” and “Men’s” tees and just encourage golfers to play from the appropriate tees?

We all know that golf is one of the most psychologically demanding sports there is.  To perform well, we’re told we have to conquer our minds and are bombarded with a plethora of tips, mental games, and positive attitudes to employ. I wouldn’t discourage anyone from embracing these, I’m an advocate of the benefits of psychology, but when it comes to protracted pre-shot routines, visualising golf shots, backing off from distractions, etc, enough is enough.  In isolation it’s not too bad, but multiply them up by thirty or forty times and you’re adding an age to your round.  Unless it’s Sunday at Augusta and you’re in with a shout up the 18th, just get on with it.

This is where I think some magazine articles can be dangerous.  The key to a pre-shot routine is that it’s ‘effective’ but it’s rarely highlighted that there is an optimum length of time for this.  Various articles on golf psychology advise players to, amongst other things, evaluate the conditions and variables, visualise the shot, rehearse the swing you want, and then address the ball. All legitimate advice, but task an amateur with getting through that in under 40 seconds (which is the time a professional is given when ‘on the clock’), and you’ll quickly see the problem.  Personally, I think there is a level of responsibility here that the psychologists and magazine editors must accept.  If you’re going to advise amateurs to adopt professional techniques, you have got to stress the time implications that come with taking their advice and perhaps encourage a slimmed-down version.  The tour pros get paid to wait in the group behind, the rest of us don’t.

Two points here, the first being simple – do it!  And at the first opportunity, please.  If you’re holding people up and aren’t being held up yourself, wave the group behind straight through.

The second is in respect of the accepted code of conduct for allowing players through.  To my mind, there’s little point standing still by the side of the fairway while the group behind hit, walk up, play again, walk on, putt out and wave goodbye.  Would it not make more sense to keep everyone moving?  Wave driving players up, and then play up to the green while they walk to their drives, mark your ball and stand aside as they complete the hole.  At least that means you’re already on the green by the time they have finished the hole, rather than back down the fairway waiting to play your approach.  Surely this makes for a smoother and faster transition and clears the fairway faster for groups behind so you’re creating space rather than just swapping positions in a queue.

Now I know there is an argument for GPS units/yardage devices speeding up the game and, used properly, I agree that they can. However, for every one person that does utilise their distance gadget to a speedy end, there are an equal number who feel it necessary to know how far it is to every hazard, sprinkler head, run off, and hollow within 400 yards of the target. A solution is difficult to come up with, beyond encouraging a little common sense.

The pressure on a golf club to maximise revenue has, in some cases, lead to ridiculously short gaps between tee times – as little as 6 minutes in some cases, but regularly 8 minutes elsewhere. I appreciate that most clubs can’t afford the luxury of (or get all their members on the course with) 15 minute intervals, but 6 minutes is barely enough time to allow a fourball to all play and stroll off the tee.  You don’t even need anyone to stray from the fairway to see a backlog of golfers with hands on hips.

Searching for balls is inevitable in just about any round of golf.  I’m not suggesting the use of a stop-watch amongst friends, but I do think there are times when there isn’t enough regard for the ticking clock. Five minutes feels like seconds when it’s your ball, but an eternity when you’re queuing behind. Above all else, ignoring the 5 minute rule is cheating. Alright, it’s not perhaps the most shocking example of breaking the rules, but it is still cheating. Abiding by the clock in this instance would certainly speed up play for some.

Speaking from personal experience, many times has a sausage sandwich at the turn been the highlight of an otherwise forgettable round, so I certainly don’t have a problem with a halfway hut, especially if it’s an unwritten local rule that every group will stop there. I’m also sure it can provide valuable income to clubs fortunate enough to have one, not to mention a welcome respite for the flagging golfer.  But in my experience sometimes groups can get a little comfy, sat in the sunshine or huddled inside for warmth and everyone’s day gets slowed in the process.  A ranger at Wentworth once suggested to me that they should remove all tables and chairs from the hut to keep people moving.  I don’t imagine that would be very popular but I take his point.