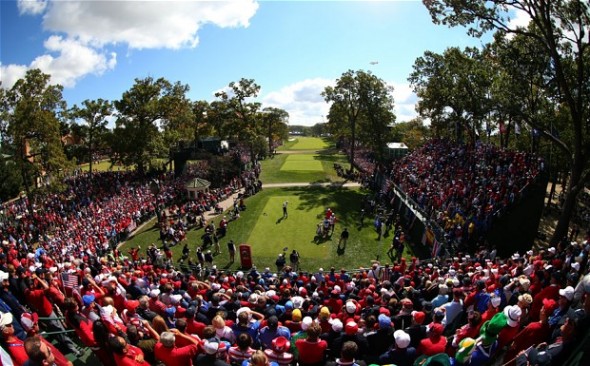 There aren’t too many original articles kicking around in the lead up to the 2014 Ryder Cup. There’s the usual features on ‘The Holes Where The Ryder Cup Will Be Won And Lost’, ‘Likely Pairings’, ‘Team Profiles’ and ‘A Look Back At The 2012 Ryder Cup’ for the umpteenth time.  In fairness, if you’re a keen golfer you won’t need much to get you excited for the Ryder Cup matches anyway, but it would make a pleasant change to find something a little more inspiring.

I don’t admit to having the answers, but I can at least share something with you that hasn’t already been told and retold ad nauseam.

Back in May I had the fortune of attending the BMW PGA Championships at Wentworth and listening to Paul McGinley answer questions from a small gathering of people over lunch.  Away from the cameras I felt he was prepared to disclose a few things he might have had reservations about telling the world.  As an example, while he was understandably guarded when it came to his wildcards and other sensitive issues, McGinley did reveal plans for what in recent years has become something of a Ryder Cup highlight – the walk to the first tee.

Not many years ago the first tee gallery was a smattering of fans politely applauding players en route to the course.  Since, I’d say, The K Club in 2006, this has been ratcheted up to a near deafening effort to gain an early advantage.  This is as visceral and vocal as golf gets and McGinley knows the value of a patriotic home crowd (whether or not Scotland is still part of the UK by then?!).

Gleneagles this year is set to take it up yet another notch. As in recent years, the first tee will be surrounded by a horse shoe grandstand that seats a couple of thousand spectators and guarantees the stomach-churning, hair-on-end atmosphere  McGinley is looking for.  Alongside that cauldron, however, is the introduction of a covered walkway from the hotel to the first tee. Lined with images of past Ryder Cup heroics, flashing lights, and a number of TV cameras to capture the moment, this new entrance is more akin to the tunnel at a football stadium or even the entrance to a gladiatorial arena. Live pictures will be beamed on to a giant screen set to the side of the first tee, so as the crowds wait patiently for the players to appear, they’ll be able to see them get closer and increase the volume levels with every step of the walk. The crescendo of noise as the players appear on the tee will surely be unprecedented.

I don’t envy the pressure that accompanies that kind of welcome, but picturing the scenes for those Friday morning fourballs certainly gets me excited about what’s to follow.  And for me it’s the little insights like that that set my pulse racing, not the regurgitated articles and TV repeats.  It’s just a shame we don’t hear more of them.