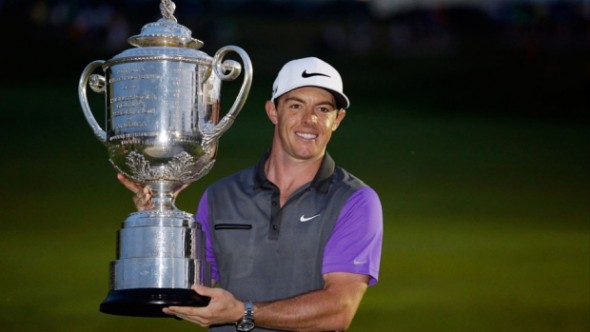 I’m sure that Rickie Fowler, Phil Mickelson and a fair few others wouldn’t have agreed with Colin Montgomerie’s pronouncement before last week’s PGA Championship that if Rory McIlory played well the rest were just playing for second place. I remember Monty making similar statements when Tiger Woods was in his prime, too. To be fair to Monty, he may be right (and it turned out he was last week) but golf is a game of such fine margins, prophecies usually come back to bite you.

I like to think top professional sportsman would back themselves to beat a fellow opponent, no matter who they are. Admitting you’re likely to lose even before you have teed it up on the first day is surely insight into the difference between certain careers. There are those that win and those that don’t, and while I’d have loved to have seen Monty get that elusive Major, there’s little doubt that he falls into the category that don’t, whilst McIlroy clearly sits in the camp that does. And of course I am only talking about the Majors here – Monty had no problem winning other events and Ryder Cup matches, that’s for sure.

I’ve always enjoyed Jack Nicklaus’ quote which sums it up perfectly. He has said that he always felt that the Majors were actually the easiest tournaments to win because half of the field didn’t think they were good enough to win one, so he only had to worry about beating the rest as the others took care of themselves. I suspect Rory now feels much the same.  Certainly Tiger did in his pomp.

There’s no denying that if Rory does play, he’s going to be in the reckoning come Sunday afternoon. And having four Major titles to your name at the age of 25 will no doubt make it even easiest for him in the future and just a little tougher for anyone challenging alongside him down the stretch.  We all know how frustratingly mental the game is at all levels.  There will be times when Rory comes up just short, just as Jack famously did so many times, but the future looks incredibly exciting for him over the next 20 years.

Comparison with Woods I tend to think is a rather pointless exercise but that won’t stop the commentators and critics drawing their parallels (like it or not). Rory has the distinct advantage now, however, of having witnessed Tiger build his career and make his mistakes.  Tiger took golfing fame to new levels and his more contentious decisions, on and off the course, will give Rory more latitude than he might otherwise have enjoyed with the press and the golfing public.  I wonder, for example, if McIlory will ever decide to rebuild his swing in the pursuit of getting even better, and then do it all again a few years later? I hope not and I sincerely doubt it. Perhaps he’ll maintain a more affable and personable relationship with the media, fans, and fellow players, as opposed to withdrawing himself within a Tigeresque bubble. And the less said about fire hydrants and women the better!

But whether he likes it or not, McIlroy will now have to deal with the heat being turned up on him. He will be the talismanic figure at the Ryder Cup (though I don’t think it was advisable saying that himself). The hype at The Masters in 2015 will be massive, as it will for every record he approaches. Legendary players Major hauls will constantly be held up as his next target, whether he’s thinking that way or not. And he’s now the most marketable golfer in the world, and arguably one of the most marketable sportsmen, which comes with its own demands, pressures and expectations. All in all, it’s some pressure, and nobody knows how he’ll react – including Rory. As McIlory conceded just this week, he’s only now starting to understand the emotional pressures that Woods lives with, so we can’t assume that Rory will remain infallible throughout his career.

I saw an interview with Peter Alliss after the PGA Championship which seemed to sum up the situation perfectly for me.  The crux of his comments were that McIlroy is much like Tiger was at 25, and so he will constantly be compared to Nicklaus and the other greats and the “experts” will routinely muse on the likelihood of him breaking every record in the book. He has the talent to do so, undoubtedly, but he still has to go and do it and life, injury and that infernal golfer’s mind can all get in the way. Just ask Tiger. So Rory may get there, he may not – all we do know is that we get to watch and enjoy his remarkable talent along the way.

All I can say is good luck Rory, and well said Peter!