Jeremy Dale has performed in over 35 countries as a golf trick-shot artist and competed professionally both right and left-handed. Jeremy is also a PGA coach, TV presenter, and After-Dinner Speaker, and has a degree in Psychology from Sussex University.

Allow me to tell you a story about one of my students, Bruce.

He is a 17 handicapper and absolutely loves golf but, in May this year, he was so frustrated that he was about to quit the game. He drove two hours to Heythrop Park for a lesson and said right at the start that and I was his last resort! No pressure then…

Bruce told me on the phone before we met that he was fed up with how his swing looked. On his practice swing he had a smooth rhythm, a nice takeaway and high hands at the end of the backswing. On his real swing, something completely different happened and he ended up with a very flat ungainly swing that he had spent years trying to put right.

He was absolutely correct too. The real swing was nothing like what he’d intended, but the problem was that he could not feel the difference between that and his practice swing. The good news was that even from the flat position, he could still hit the ball ok, but was so concerned about consciously changing or controlling his swing that he had lost sight of the most important thing in any swing – the path of the club and position of the clubface at impact.

I decided that his backswing was not the problem. He couldn’t feel it anyway so instead we talked about what the clubface needed to do at impact to produce a draw on his shots – something he’d never been able to do. Most people think that to hit a draw shot you need to roll the wrists at impact but actually this is not really necessary.

Kendal McWade, the brilliant Scottish coach, once taught me a shot that he called the ‘toe led hook’ in which the clubface felt so shut at address and impact that the toe of the club appeared to arrive at the ball before the heel. If you think of David Beckham’s boot as he curls the ball around the wall on a free kick then you will have the idea. The clubface needs to replicate that same look in a draw shot.

I showed Bruce that by pushing the hands forward at address, turning the clubface so it looked closed and swinging the club hard from in to out, he could hit a draw every time.

“It feels like it will snap hook” he said.

“Let’s try it’” I replied….just before he hit a beautiful one yard draw.

The toe led hook worked for Bruce with every club – even the driver and we decided that like many great players, he was going to hit one shape of shot. Just as Jack Nicklaus hit a fade and Tom Watson a draw, Bruce now had his bank manager’s shot. It is a shot he can rely on when he plays and it does not require endless conscious control or thinking. He just decides where to start the shot and how much it is going to draw.

“The Best Golfing Decision of My Life”

Bruce wrote me an email recently saying saying that his friends cannot believe the difference in his game and that he now routinely shoots his handicap. He continued, “My ‘driver’ game has never been better and I have never felt as confident or happy stepping onto the tee. Getting in my car and driving 100 miles to see you was without doubt the best golfing decision of my life – thank you!”

It does not have to be ‘’perfect’’

It is nice to help someone this much – but the main lesson is that it is possible to win with a swing that looks unconventional if you control the club path and face at impact. 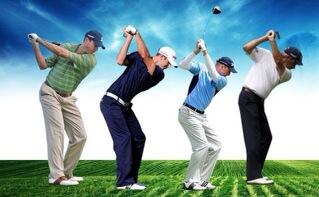 If you want any examples then look at this photo of some of the world’s best. They are all different but they all can control their shot shape. Just ask their bank managers!

This article has 1 comments