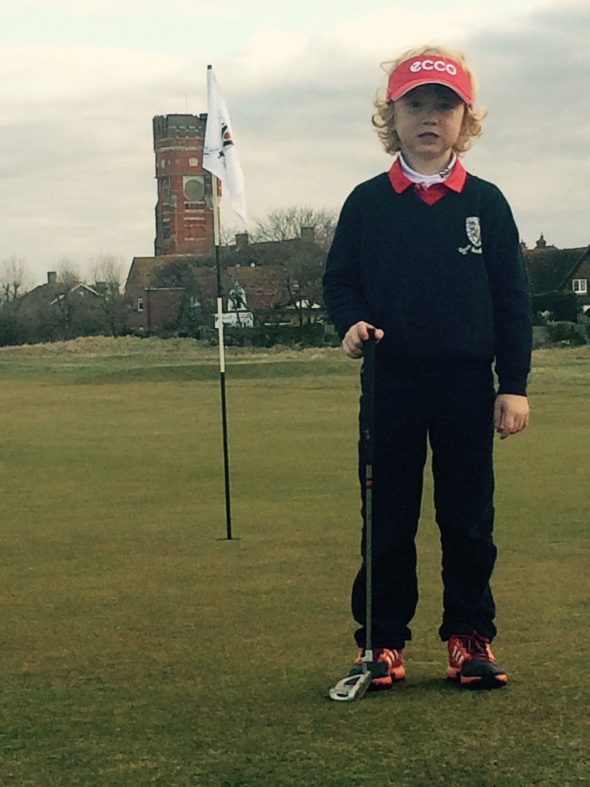 Virgin Atlantic has flown to the rescue of Arthur Saunders and realised the dream of the five-year-old Kent golfer of flying to America with his father to take part in the IMG Academy Junior World Championship in San Diego in July.

Arthur, who plays out of Littlestone Golf Club in south east Kent, earned himself a place in the prestigious Championship in March when he finished second in the Boys 6 and Under division of the British Junior Golf Tour at Redbourn Golf Club.

Friends and members of Littlestone Golf Club on Romney Marsh had only just announced the staging of a golf day in order to raise the £4,500 required to fund Arthur and his father’s trip, when Virgin Atlantic generously stepped in and offered them free trans-Atlantic flights. Both Arthur and his father are over the moon and can now look forward to travelling to America in the summer.

The golf day at Littlestone, scheduled for June 12th and priced at just £50pp, will still go ahead to cover expenses such as accommodation and car hire for the Saunders whilst in America.  Any excess money raised will go into a bursary pot for other juniors at Littlestone (to play or donate a prize please contact Sarah at Littlestone Golf Club at sarah@littlestonegolfclub.org.uk).

Arthur’s participation in the Junior World Championship is a remarkable achievement for a boy who only started to play golf a couple of years ago when his father took him along to Littlestone where he himself was having golf lessons. This sparked an interest in the game and it was not long before Arthur was taking lessons himself under the watchful eye of Littlestone coach, Charlie Wilson.

“It’s not just Arthur’s natural talent that has led to his success but his absolute dedication and passion which all comes from him,” says Charlie. “The only time we’ve seen Arthur cry is when his mum comes to take him home! His etiquette and knowledge of golf is fantastic and we have never seen a youngster of his age with such maturity and commitment to the game. He really is quite extraordinary.”

Now a junior member of Littlestone GC in his own right, Arthur has surpassed both his parents’ and coach’s expectations with the natural talent and dedication that he exudes for the game.

“The fact that Littlestone welcomes juniors meant I could take Arthur with me when I went for lessons,” explains Arthur’s dad, Ken. “It was evident from very early on that Arthur loved the game so we signed him up with Charlie and he has never looked back.

“He wakes me up at 6am every Sunday so we don’t miss a moment to play golf or be at the club. He knows every distance from every tee box at the Championship Links course at Littlestone. He even has a life-size cut-out of French professional, Victor Dubuisson, in his bedroom! We have tried to introduce other sports but he won’t have it. He eats and sleeps golf.

“If you ask Arthur what his favourite TV programme is he answers without hesitation “Golf!”. If you ask him his favourite subject at school, it’s “Arithmetic” and if you ask him why he will tell you proudly that it is so he can enter his own Stableford scores, which incidentally, he can!”

Aside from his outstanding golfing achievements, Arthur is a typical five year old; he attends Brookland Primary School on the Romney Marsh, likes Transformers and  macaroni cheese and enjoys making paper aeroplanes.

Littlestone, a Final Qualifying venue for the 2011 Open Championship when it was staged at Royal St George’s, is part of the Visit Kent Golf Partners Programme that promotes the wide variety of fine golf courses that are located in Kent to the rest of England, to Europe and the USA. For more visit www.golfinkent.co.uk and follow the group on Twitter @Golfinkent.