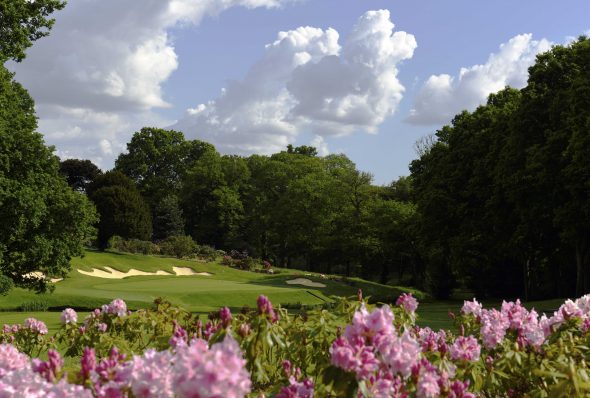 The stunning renovated golf course at Stoke Park Country Club, Spa & Hotel, in Buckinghamshire, will host an ‘open day’ on Saturday, April 29 – when visitors will be able to take a close look at the bunker work which has taken place during the winter.

The historic venue – one of just two five-AA Red Star golf clubs in England – boasts 27 Harry Colt-designed holes and is renovating each loop of nine in turn across three consecutive winters. And the middle nine, the Alison course, will reopen for members on April 21, meaning visitors to the open day will be among the first non-members to enjoy the facilities.

Guests will be able to play a few holes on the revitalised course and also look around the venue’s numerous facilities, which include a state-of-the-art health club, spa and pool, 13 tennis courts, three restaurants and bars – including the three AA rosette fine dining Humphry’s – and 300 acres of mid-19th century Lancelot ‘Capability’ Brown-landscaped parkland.

The open day has limited numbers and interested parties should contact James Jewell in the Stoke Park golf department to reserve their place.

Jewell explained: “The course is already looking wonderful and we believe both members and visitors will be delighted by what they see in a few weeks’ time. With the third nine set to be redeveloped next winter, there’s arguably never been a better time to be a member at Stoke Park.”

Refurbishment of the Alison nine – laid out by legendary course designer Colt in 1908 – includes improving the definition of the bunkering, which had, understandably, deteriorated in the intervening years, the addition of new tees and an extensive reworking of the water features on holes 12 and 17, plus some cosmetic tweaks to the water hazard on 16.

The renovation of the 27-hole resort has been made possible by a substantial seven-figure investment, with the third nine, the Lane Jackson course, completed during the winter of 2017/18.

Set within 300 acres of beautiful private parkland estate in Stoke Poges, Bucks, Stoke Park is only 35 minutes from London and seven miles from Heathrow Airport.

The historic land on which it stands is recorded in the Domesday Book of 1086 and the celebrated course played host to the PGA Matchplay in 1910 and, even more famously, the golf match between Sean Connery’s James Bond and Auric Goldfinger, in the 1964 film, Goldfinger. Stoke Park also has a thriving golf club with around 800 active members.