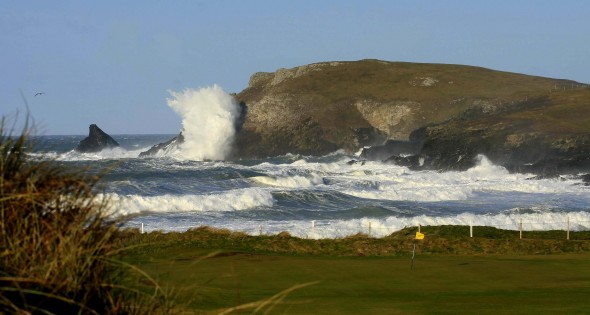 The ongoing commitment to course and clubhouse renovations by the five member clubs of England’s Atlantic Links have ensured that this trail of the premier championship links in South West England remains both vibrant and relevant to today’s golfing landscape.

Following its inception in 2009, the Atlantic Links trail that take in Burnham & Berrow, Saunton East and West, Royal North Devon, St Enodoc and Trevose has made its mark on the global golfing map as a must-play set of links golf located along the wild and dramatic backdrop of the north Atlantic coast.

Recognizing the need to remain fresh and yet allow golfers to continue to enjoy these ancient layouts designed by some of golf’s most notable architects, the clubs have instigated a variety of changes to course and clubhouse over the last few years.

At Trevose the work has focused on the adoption of a consistent bunkering style and a return to the traditional rough-edged bunkers, characteristic of many courses designed by Harry Colt. A number of new greens have been constructed and extensive reshaping of more than half of the green surrounds undertaken, all inspired by the best of the original greens like those at the 7th and 10th.

Work is continuing this year with the major project of reconstructing the signature 4th hole which involves re-bunkering the hole and creating a visually-striking new green around an acre in size that provides spectacular views over Constantine Bay and Trevose Head.

“The plan is a reflection of our ambitions for Trevose – to reinforce its position in links golf, offer the best possible facilities to our members and visitors and to attract further regional and national events,” comments the general manager Nick Gammon whose family has owned the resort for three generations.

Saunton meanwhile has invested a great deal on and off the course over the past six months.  Following on from modifications on the East course last winter, changes have been made to nine of the holes on the West course in order to bring it out of the shadow of the East course.

Under the guidance of Tom Mackenzie, a lead partner at Mackenzie & Ebert, the West has been lengthened to 6,596 yards.  Measures have also been taken to make it easier for higher handicapped players whilst the addition of a number of fairway bunkers has created a more strategic layout that places greater emphasis on brain rather than brawn.

“The work done by Mackenzie & Ebert has been undertaken to really raise the profile, complexity and enjoyment of the West course so that Saunton now offers two equally stunning links on the North Devon coastline,” explains Russell Mayne, General Manager of Saunton Golf Club. “The men’s locker room facilities have also been extensively upgraded to satisfy the demands of the modern golfer so that now all areas of the clubhouse are what you would expect from a venue with two courses highly placed in the top 100 golf courses in England.”

Further down the coast, St Enodoc has directed a great deal of investment into its second course, The Holywell, with time spent renewing tees, manicuring bunkers and upgrading the overall presentation of the course to a level enjoyed on the main Church Course. The Holywell now gives members and visitors alike a genuine alternative to the demanding 6,547-yard championship links when looking for a quicker round of golf whilst offering youngsters, seniors and higher handicappers an enjoyable round over a shorter, well-maintained layout.

The clubhouse was also recently refurbished in a modern, New England style in time for its 125th anniversary celebrations and now boasts a bright, airy lounge area, restaurant and bar with picture window overlooking the 18th green and an elegant terrace for al fresco dining in the summer.

At Burnham & Berrow where the Atlantic Links tour tees off, the club has an ongoing programme of improving the course with the upgrading of its traditional revetted bunkers and maintenance of its pathways as its focus this winter.

Off the course, the Pro Shop has been through a major facelift that has given it a crisp, modern exterior that has made it more apparent and welcoming to visitors whilst the clubhouse lounge, ladies changing rooms and The Dormy House have all been refurbished to offer a better standard of facilities.

Meanwhile at Royal North Devon, England’s oldest links, where the course has hardly changed in over 150 years and playing it is like taking a step back in time and discovering how golf was played in the Victorian era. The club is keen to hold on to this unique golfing experience so, apart from maintaining the standard of the course conditioning, no major renovations have been undertaken.

However in order to show off its treasure trove of golf memorabilia and improve the club dining facilities, the clubhouse was refurbished in recent times. Today visitors not only enjoy golf amongst the sheep and horses that graze on the common land where the course is laid out, but can now gaze at historic golfing artefacts such as hickory clubs, portraits of J H Taylor and ancient golf balls displayed in bright, new cabinets around the clubhouse.

By committing investment to renovation and remaining vibrant and relevant to the modern golfer, the Atlantic Links are looking to retain their reputation as one of England’s premier golfing destinations for many more years to come.

Five-round, five-night tours of the Atlantic Links, staying at Trevose GCC and the Wayfarer Inn, start from £572pp in low season based on two people sharing. For bespoke or tailored golf packages, visit www.atlantic-links.co.uk, email info@atlantic-links.co.uk or call +44 (0)1637 879991.