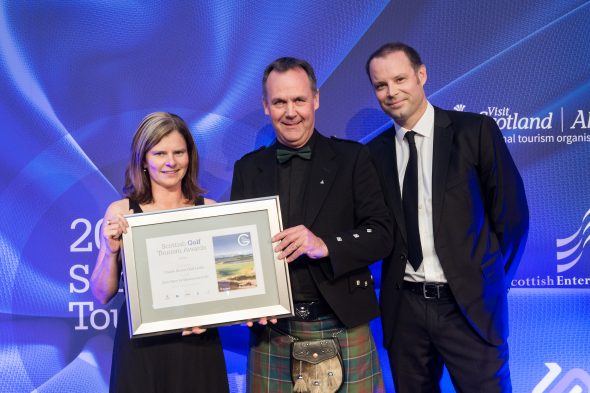 The Moray Firth course was shortlisted in five categories and was ultimately rewarded for offering value for money by picking up the award in the best value (over £100) category.

The awards gala dinner was attended by more than 350 guests from across the Scottish golf scene at the Trump Turnberry resort last night (October 26).

Stuart McColm, Castle Stuart’s general manager, said: “We are delighted to receive this award and would like to thank the voting public.  It means a lot to the Castle Stuart team who work tirelessly on a day to day basis to deliver great service on and off the course to be recognised for their hard work.”

Castle Stuart hosted the European Tour’s Scottish Open from 2011-2013 and again in 2016.  Last week it announced record-breaking visitor numbers this year, and increased bookings for 2018.

The number of players visiting the course near Inverness is up 18 per cent this year compared to 2016, while advance bookings for 2018 are also showing a 26 per cent increase on the same time last year.

Since last year, visitor numbers from Canada have risen by 79 per cent, from Benelux by 60 per cent and South Africa by 47 per cent, while Scandinavian visitors have increased by 45 per cent, US by 17 per cent and Germany, Switzerland, Austria and Liechtenstein all by 14 per cent.

Castle Stuart attributes much of its increased business to recently-introduced air services connecting the Highland capital with Heathrow and Schiphol Airport in Amsterdam which have added to other air services.