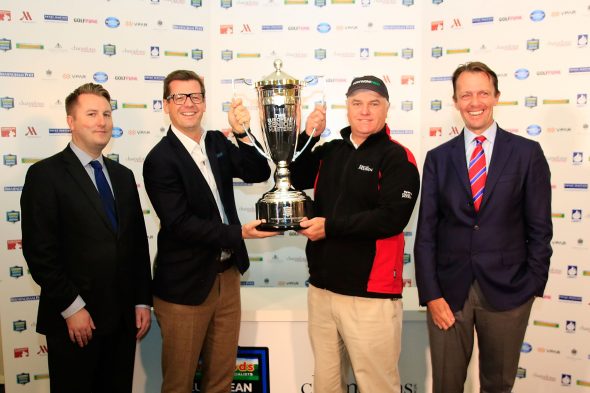 The 51 year old, who moves up to eighth place on the European Senior Tour Order of Merit, spent most of the day chasing both Dennis and 2014 Ryder Cup Captain Paul McGinley, and found himself one shot behind with three holes to play, after a bogey on the 15th hole.

Playing in the penultimate group, Dodd found the fringe at the front of the green on the par three 18th, the signature hole at Forest of Arden, leaving himself 40 feet for birdie and a share of the lead.

The Welshman made the putt, which rolled around the hole before dropping in, to join McGinley at the top of the leaderboard on two under par.

McGinley, playing in just his fourth Senior Tour event, struck his tee shot short of the green and then missed a tricky putt for par to drop to one under. Dennis found the green, but missed a birdie putt from 15 feet, which would have forced a play-off, handing Dodd his second title.

“It was one of those putts where I was just trying to get by the hole, but fortunately it went in,” said Dodd. “The thing with tough conditions is there aren’t going to be scores like 64s or 65 out there. Level par is usually a good score and that’s what I had in mind today.

“The field was great this week, and to come out on top is a great achievement for me.”

“I had a good start today which was important and I made a lot of pars from there. It was tough on the back nine to get it close and make birdies. Thankfully I made one on the last when it counted.

In fourth place Jarmo Sandelin, a member of Europe’s 1999 Ryder Cup side, recorded the best result of his debut Senior Tour season on one over par, and two strokes further back were Peter Fowler and Philip Golding on two over par.

Peter Baker, playing in his first event on the over-50s circuit, took a share of seventh place with Gordon Brand Jnr, Paul Eales and Tim Thelen on three over par.