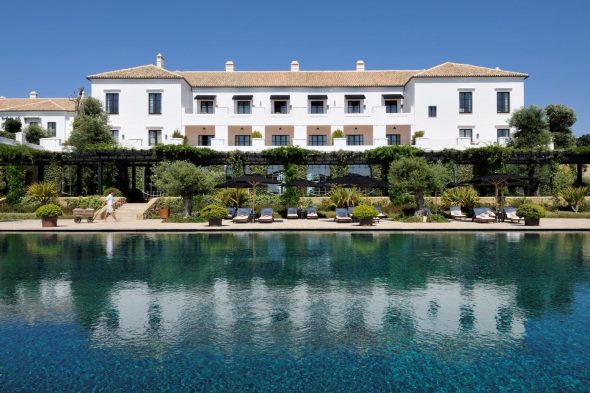 Not only did the exclusive Andalucian resort’s Hotel Cortesin receive the top honour at the ‘2018 Preferred Awards of Excellence’ ceremony this month but it was also named ‘Best Resort in Spain’ by the country’s Condé Nast Traveler magazine.

Preferred Hotels & Resorts represents more than 700 distinctive hotels, resorts, residences, and unique hotel groups across 85 countries, while the Condé Nast Traveler accolade is the second major honour to be bestowed on Finca Cortesin by the luxury global media brand after its UK title ranked the resort’s hotel as one of the 50 best in the world last year.

Rene Zimmer, general manager at Finca Cortesin Hotel, Golf & Spa, said: “Everyone at the resort is thrilled and very proud to receive two such notable awards.

“We’re always striving at Finca Cortesin to make our guests’ stay as comfortable and enjoyable as possible. To be honoured in this way is very gratifying and I’d like to say a big thank you to all our team for making this possible.”

The ‘Preferred Awards of Excellence’ recognise partners across the company’s worldwide network that exemplify excellence within the hotel brand, with this year’s global winners announced in San Diego, on the west coast of America, on May 4.

Lindsey Ueberroth, CEO of Preferred Hotels & Resorts, said: “It is an incredible honour to celebrate these partners for their tremendous leadership and outstanding dedication to inspiring travel by delivering the highest quality experiences in an authentic way. These winners, along with every other member hotel that was nominated, exemplify the core of hospitality and prove that every effort can have a big impact on our industry’s footprint.”

Opened in March 2006 and set across a vast 532-acre estate, Finca Cortesin is regarded as one of Europe’s most exclusive modern golf and lifestyle destination resorts, and the awards are the latest in a growing list of honours to be bestowed on the resort.

As well as the venue’s championship golf course moving into the top 20 of the Top 100 Golf Courses’ European rankings list for the first time in its history, the resort – a member of the exclusive European Tour Properties network – was recently named as the ‘Best Golf Resort in Europe’ by users of the respected website Leadingcourses.com.