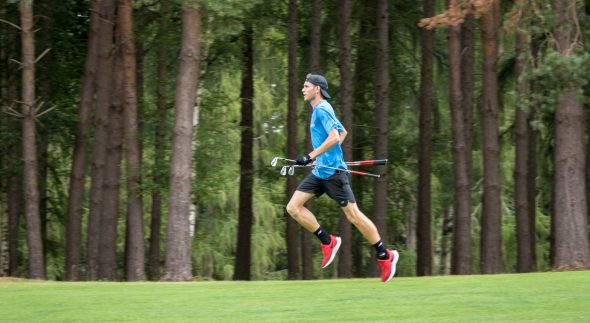 New Zealand had their sporting revenge over England in the 2019 British Open Speedgolf Championship, hosted at Foxhills Club & Resort.

Just two weeks after the nail-biting World Cup final between the two nations in the cricket when England edged home in a thriller at Lord’s, Jamie Reid sealed success for the kiwis as he scampered home for victory ahead of home favourite Chris Benians.

The high-octane sport lived up to its name on the Longcross with an incredible mix of athleticism and golfing ability on show with five players finishing 18 holes in under 50 minutes.

The 28-year-old Reid’s superior pace over his rivals was the key, as he shot a nine-over-par 81 in just 40 minutes and 57 seconds to post his Speedgolf Score of 121.57. Perhaps even more remarkably, he did it without using a conventional putter to save weight and completed his round with just three clubs: a four-iron, seven-iron and pitching wedge.

Defending champion Benians, meanwhile, shot a superb two-over-par 74 in just under 50 minutes (123.59) for second place ahead of reigning world champion, Mikko Rantanen from Finland, who also shot 74 in 51.07.

In other categories Kathy Leppard won the women’s division, whilst newcomer Chris Fenn scooped the amateur title with competitors from USA, France and Germany also among the international field across the categories.

Chris Fitt, director of golf and leisure at Foxhills, said: “It was a pleasure to host the event and congratulations to Jamie and to everyone else who took part. These golfers are amazing athletes and it’s a worthy sport in its own right.

“I think most people would struggle to run round the course in under 41 minutes, let alone shoot nine-over while you’re doing it. And to shoot two-over-par round the Longcross is no mean feat at the best of times – to do it in 50 minutes is nothing short of incredible.”

Pam Painter, co-founder of British Speedgolf, said: “It was another fantastic showcase for our sport at a fabulous venue. It was a blistering pace – this is golf at full throttle!”