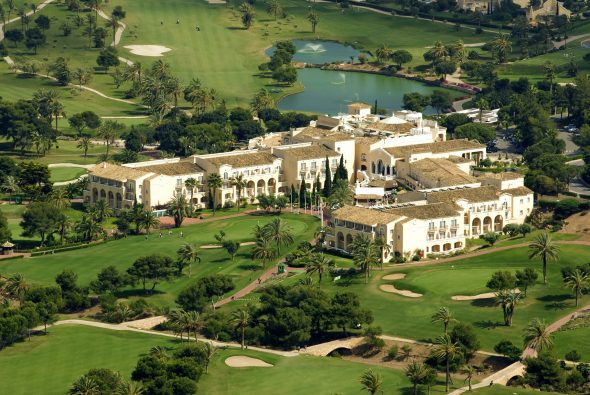 The five-star La Manga Club resort has written a new chapter in its ever-evolving global success story after winning two further top honours at the World Travel Awards – the Oscars of the travel industry.

Spain’s flagship sports and leisure resort continued its amazing run at the event as its five-star Hotel Principe Felipe was named ‘Europe’s Leading Luxury Resort & Villas 2019’ for the third year running at the prize-giving ceremony in Madeira, and also retained its title as ‘Europe’s Leading Sports Resort’.

Taking place for the 26th time, the annual awards are globally recognised as the most prestigious honours programme in global travel and tourism, and are regarded as the ultimate industry accolade.

Nick Montgomery, general manager at La Manga Club, said: “It’s always a privilege to be shortlisted for awards of this nature but to win two of the leading accolades, including one for three years in a row, is incredible. What an achievement!

“The travel world is a constantly changing industry but La Manga Club continues to rise to the challenge. We are all extremely proud to work for this great resort, there is no other place like it in the world and we will continue to strive to offer all our guests the best customer experience possible.”

Graham E. Cooke, founder of the World Travel Awards, said: “The World Travel Awards are voted for by travel and tourism professionals and consumers worldwide, and these honours recognise the commitment to excellence which La Manga Club has demonstrated. We congratulate everyone at the resort on their achievement.”

Set in an exclusive corner of Murcia in south-east Spain, La Manga Club has been a market leader for European sports and leisure resorts since opening in 1972, and its popularity is reflected by the number of other accolades it has received this year.

As well as being a recent recipient of Golf Digest magazine’s coveted ‘Editors’ Choice Award for the Best Resorts in Continental Europe’ for the third successive year, the resort has also been shortlisted for three top honours at this year’s World Golf Awards, including being in contention to be named as ‘Europe’s Best Golf Venue’ and ‘Spain’s Best Golf Hotel’ for three years in a row.

Also the official overseas training base of the Lawn Tennis Association (LTA), La Manga Club’s unrivalled facilities include three 18-hole golf courses, a 28-court tennis centre, a recently-opened European Cricket Performance Centre and a 2,000sqm Wellness Centre. The resort is host to Spain’s only official Chelsea FC Foundation Soccer School while, in addition, it features the choice of a five-star hotel, four-star serviced apartments and townhouses and more than 15 bars and restaurants.